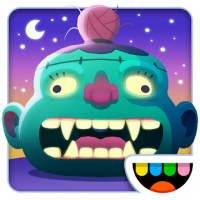 Toca Mystery House is an educational, picturesque game for children with a reputation to pique their curiosity. The app has a solid plotline that is explained in the very beginning and even on the app descriptions on both the Google Play Store and the Apple Store. It’s engaging and almost as if you’re participating in a cartoon – and that’s what make Toca Mystery House a game beloved by children.

The story of Toca Mystery House follows a curious narrator who wants to explore a strange mystery house down the lane. This spooky house has been speculated to be haunted by aliens and unexplained phenomena. As the curiosity in you ignites, you plan to explore every room in the house and uncover the mystery it holds.

While the concept of Toca Mystery House might be slightly on the horror side, it’s nowhere near the likes of a horror game. The app is rated appropriate for children above seven years of age but children slightly older may enjoy it more.

Toca Mystery House, amongst other things, is more of an educational puzzle game. Players are tasked to explore this spooky house by swiping and tapping on rooms, objects, doors and practically just about anything that intrigues them. Interspersed between these taps and swipes are numerous interactive puzzles and games that can rack the child’s brain and make him think more logically.

The different activities and puzzles featured in the game can help you create potions to feed and change monsters in the house, do some vacuum cleaning, clean the fridge or unearth the mysteries of the aliens that seemingly inhabit the top floor of the house.

Toca Mystery House has gorgeous, smooth graphics that add to the fun of the game. They remind us of any popular and new cartoon and it really feels as if you’ve been transported inside a cartoon TV show.

This app is a wonderful choice for children to pass their time. It provides good brain food all the while keeping things light hearted, fun and cartoony. The educational value on this game is great which makes it a beloved game for parents as well. There are elements of subtle violence and some amount of creepiness in the game but this can easily be overlooked. However the challenges and puzzles in the game may be too difficult for younger children or even kids who are seven years of age. More appropriately, this game is suitable and more enjoyable for children who are slightly older and have a better grasp at math and logic.

It should be remembered that Toca Mystery House is NOT a free to play game. Yes – you heard it. It requires payment. Although it costs only a meager $3, the fact that the game is not free to play might turn parents away. But the good part is that Toca Mystery House has few ads to bother you during your gameplay. This is important because children playing the game may be misled by their curiosity into clicking these advertisements instead which may or may not be appropriate for them.

There’s little to say about Toca Mystery House failing in anything. It has fared exceptionally well recently of both the Google Play Store and the Apple Store. Parents and children rave about the graphics, sounds and the entire feel of the game. However, if the developers added more puzzles and activities, Toca Mystery House might become even more fun to play.

Why do we recommend Toca Mystery House?

What can be improved in Toca Mystery House?