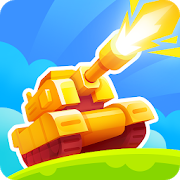 Playgendary makes a homerun again with its arcade game Tank Stars. The familiar cartoony graphics as seen in other games by this game developer and the subtle themes of violence, aiming and bullets are all present in Tank Stars. The game has accrued some pretty great reviews from users in the app store but at the same time, it has failed in some areas. Let’s dissect its success and whether you should give it a shot yourself or not.

Like other hit games by Playgendary, Tank Star adopts a similar aim and fire gameplay – only this time it’s with battle tanks. Fans of military games as well as target shooting will love Tank Stars. Its smooth, breezy gameplay makes it a fun a venture and one that can keep you busy for hours. The goal of the game is pretty straightforward: you need to aim at the right angle and power to shoot down your enemy with canons. You can also move your tank forward and backwards in the later levels by using up a set limit of fuel. This is important because some canons and missiles can set the ground on fire and deplete your life quickly.

While there’s really no complexity in the Tank Star’s 2-D style gameplay, it can still become an addiction. Players start off with a basic tank with a one kind of missile to take down their computer enemy. However, as you proceed through the levels, you earn and win different types of canons, missiles and combos to fire at your enemy which makes the game much more exciting and almost strategic.

Players can also unlock newer and more powerful battle tanks with gold and gems that can either be won through succeeding several levels or by purchasing with real money. Although the total number of battle tanks is limited, they are still enough to keep the game relevant and break the monotony.

The first few levels in Tank Stars start off with a computer AI opponent that really isn’t too smart. Playing against the computer is generally easy. But when you win a set number of levels against the computer, new modes to play against your friends and strangers across the world are unlocked. Playing with your friends or other Tank Stars fans is much more fun than playing with the computer. You can also win more rewards when you play against real players. Tank Stars has interesting cartoony graphics, vivid colors and smooth controls. There is minimal violence involved in the game with splashes of blood seen here and there when an innocent animal gets blasted by yours or your enemy’s missile. Overall, however, the game is pretty clean and decent.

The app design is also user friendly and getting the hang of it is no problem at all. Right at the beginning, players are shown a quick and precise tutorial on how to play the game. Once they complete this tutorial level, they are directed to main page from where they can play further levels, upgrade their tanks, equip new missiles or open chest boxes.

Tank Stars has fared pretty well in the app stores but at the same time it has received numerous amounts of criticism. This criticism is based mainly on the game’s greedy reputation. Not only are ads thrown in your face constantly during the game but in-app purchases are heavily promoted throughout the app. In fact, the moment you first download and run the application, you’re offered to subscribe to the Diamond membership by paying. This can be extremely frustrating for people who want to have a good time and enjoy a free to play game without constantly being badgered by ads and promotions.

Why do we recommend Tank Stars?

What can be improved in Tank Stars?