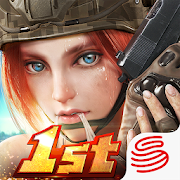 Rules of Survival is an epic action survival game that shares characteristics with a dozen other game in the same genre. The common theme of death match, shooting and survival is seen in this game as it is in many others. Rules of Survival, however, gives the rest of these similar games a pretty tough competition though. You can download Rules of Survival from the Google Play Store for free or from the iTunes store also for free.

Rules of Survival is how you would expect any good death match survival game to be like. You’re pitted against your enemies in vast landscape where there are safe zones, places to hide and areas to plan your ambush. You’ll find just about all the classic artillery in this game as well. When it comes to uniqueness, we doubt it for Rules of Survival. Although the developers advertise the game to be completely unique with a gameplay where you have to rewrite your own rules of survival, at the end of the day it’s just another shooting and action game. The last man surviving takes home the trophy and climbs up to the leader charts.

This, however, doesn’t mean that Rules of Survival isn’t a good game. If you’re into exploring new survival games and are tired of Fortnite or PUBG, there’s no harm giving this free to play game a shot. Of course your expectations might not be completely met but the game does manage to keep its format classic.

Rules of Survival is developed with some pretty jaw-dropping graphics. The 3D art is commendable and sucks you completely into it. If there’s anything Rules of Survival really outshines itself in, it’s probably this aspect. Along with the terrific visual presentation, the game also provides great soundtracks, effects and music.

This free to play action shooting game throws your character into a world where you can collect scattered weapons and arm yourself to the teeth. Recently, the developers of the app have upgraded the map to a 8x8 km map which now lets up to 300 players to battle at the same time. The terrains in the map are perfect to build your tactics. There are also safe zones where no one can harm you but these safety zones shrink over time. You main goal of the game is to be the last person surviving in this 300-players battle arena.

Currently Rules of Survival has over 230 million active users who play the game. There is no denying that the battle royale in this free to download and play game is colorful and full of features but again, it doesn’t make an effort to truly stand out.

You can also play in teams in Rules of Survival and you can communicate with your team members through the in-app chat facility. The solo mode, however, is the most popular one and if you manage to survive till the very end you escalate rapidly through the charts.

There is also a florid variety of weapons and armors that you can accrue throughout the map. What’s more, you can even drive certain vehicles available and use them to explore the entire bumpy terrains of the map.

There are a couple of problems with Rules of Survival though. Apart from being a pretty average survival game, the developers update the app too frequently which leads to confusion and an inevitable occurrence of technical errors and bugs. Plus, although the developers say the game is fair for every player, there are a lot of hackers on the platform.

Why do we recommend Rules of Survival?

What can be improved in Rules of Survival?

Rules of Survival is one of the top apps in the Actions app category, which belongs to NetEase Games. It's last update was on April 4, 2019 and it has been already downloaded 10,000,000+ times. On the app store it has now 1,653,646 reviews. After you get to Rules of Survival page on the app store, click install & enjoy it.