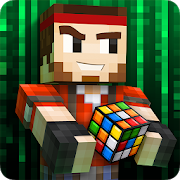 First person shooter games are too many to count on the app store but only a handful make a solid impression on seasoned players of this particular genre. Pixel Gun 3D takes inspiration from Minecraft-style art but with a gameplay that is completely different from the latter. Pixel Gun 3D not only offers a shooting experience for player but also mini games, base building, clans and much more. The app Pixel Gun 3D is more or less a mini pocket version of the actual game but we’re not complaining. The developers have managed to do justice to the Pixel Gun 3D title and created a pretty stellar FPS shooter game for us. This app can be downloaded for free and is available for both Android and iOS players.

As in any other FPS game, in Pixel Gun 3D you control your characters, shoot down your enemies and claim victory. The controls of Pixel Gun 3D are pretty easy to master but the challenge that comes in the game, especially the multiplayer modes, is not as easy as the controls are. The art and graphics of this FPS shooter is almost identical to what you see in Minecraft. The colors, however, are more refined and advanced. Other than that, block and pixel art is pretty much the same. So if you’re a fan of these kinds of graphics, Pixel Gun 3D might be the game for you.

Pixel Gun 3D hosts both a campaign mode and a multiplayer mode. In the campaign story mode your character comes face to face with a pack of zombies, cops, robbers and a lot of other enemies. The objective in this campaign mode is to eliminate all groups of enemy or else you’re doomed. There are plenty of features in this story mode and they are constantly updated as well. Some of the recent new additions to the campaign mode include a new training camp for first-timers, more detailed graphics, new cool maps like a Forest full of seeds, new songs and a more challenging gameplay.

Players get to choose from a long list of weapons to equip including the AK47, MP5, Colt and much more. There are also a range of maps in the campaign mode to explore backed with exhilarating background sound effects and songs.

Although the campaign mode has a lot to offer in this pocket edition of Pixel Gun 3D, it’s the multiplayer mode that really outshines. In the multiplayer mode, you can choose your own skins for your character. You can also select between three different multiplayer options to play: battle royale, death match and a cooperative mode. In the death match mode, players are pitted against other Pixel Gun 3D users from across the globe with a full freedom to use whatever weapon they have unlocked. Up to 8 players can join a single death match game with chat support to enhance your communication. The battle royale is similar but with the objective to become the last man standing and a much larger player arena.

Finally, in the cooperative multiplayer mode, you can join a team of up to 4 players, chat with them and form your battle strategy to raid on enemy teams. There are a total of 8 special maps in this mode each with its unique set of characteristics.

Pixel Gun 3D is a FPS player’s dream come true but it does sometimes suffer from a few technical bugs here and there. This app is also slightly infamous for being money-grabbing. It will constantly force you into making costly in-app purchases and sometimes these purchases will seem necessary to progress further into the game.

Why do we recommend Pixel Gun 3D?

What can be improved in Pixel Gun 3D?