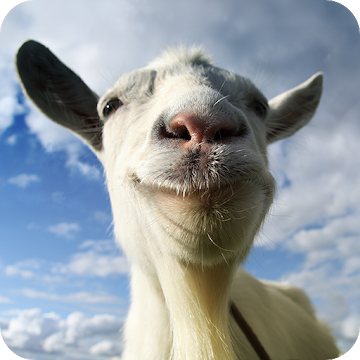 Chances are you’ve never really pondered over how it would feel like to be a goat. Sure, you might have imagined how your life would have been if you were a bird or a dog but it’s unlikely you want to exchange lives with a goat. Well, too bad because the popular Goat Simulator will let you live as a goat and a goat alone. Surprisingly, it’s actually quite fun!

Goat Simulator started off as a PC game. After its alarming success, the creators of the game decided to release an Android version of it as well. The game was initially a paid app on the Google Play Story but it is now a free to download and play game as of late.

What’s Goat Simulator about? Pretty much nothing to be honest. In this game, you get to be a goat with murderous intentions. There is no set objective in the game but you can go around exploring the town or the houses inside and breaking everything and anything in your path. You can also jump and climb on heights but it’s the breaking that gets you points. Scoring isn’t the center of focus in Goat Simulator, though. Players who pick up this game don’t do it with the intention of a challenge or something serious. It’s a pretty gimmick of a game that incorporates dark humor at times and other times, completely silly. In fact, it’s the exploring part that’s the most fun in the game.

The app description on the Google Play Store does set a goal for the game though: cause as much destruction as possible. Now we don’t know the storyline or motive behind our rebellious mind or why we’re a goat in the first place, but it’s clear that as a goat we’re enemies of the human population.

There are few bonus elements in the game and the ‘gameplay’ if we can even call it that is ill-defined. However, you can collect items to unlock new characters like the giraffe or the ‘tall goat’ but it does the same exact things as the goat. The controls in the game are also crude but maybe that’s how the developers wanted them. The whole game is pretty much a joke and a hilarious affair so little thought has been put into polishing the controls. On the app version of Goat Simulator, you can maneuver the goat with your thumb on the bottom left of screen and you can jump and attack by tapping on the bottom right. As with the controls, the graphics in Goat Simulator are also pretty simple and crude. They are 3D, no doubt about that but they are poorly animated. Again, the crude graphics and controls were probably intended and many fans of the game enjoy this prospect of the game.

Goat Simulator has elements of violence and hence it is not appropriate for children under the age of 13. The game is free to download but you will need to pay for additional levels in the game.

One important thing to note is that Goat Simulator in smartphones is a relatively small game especially when compared to its PC version. The PC version features an enormous world you can explore; in contrast, the smartphone game is limited. So if you want to further explore and ignite your passion for Goat Simulator, we suggest you download the PC version of it on your computers.

Why do we recommend Goat Simulator?

What can be improved in Goat Simulator?

Goat Simulator is one of the top apps in the Simulation app category, which belongs to Coffee Stain Publishing. It's last update was on September 17, 2018 and it has been already downloaded 5,000,000 - 10,000,000 times. On the app store it has now 100.153 reviews. After you get to Goat Simulator page on the app store, click install & enjoy it.