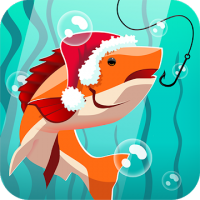 Go Fish is a relaxing fishing game experience with a lot of rewards and trophies to reap. There’s little challenge to the actual game and players can play only as a single player but there is still a certain appeal to this app that keeps us interested. Go fish is a free to download and play application and it is available on both the iTunes store and the Google Play Store. As with most other games, there are in-app purchases you can make in this app to make it more fruitful and full of exciting features.

In Go Fish, players take the role of an elderly fisherman who is out on his boat fishing. There’s really no backstory to it and the moment you run the game for the first time, you’re thrown into the game at once. There’s no startup tutorial to get you accustomed to the game either but since the controls and features are pretty simple, it doesn’t take a genius to figure out what they need to do in the game.

The objective is to catch fish and make money out of them. We’re not sure how the fish caught are instantly converted into dollars but that’s just how it is. All you need to do is throw your hook down into the water and move it around to catch some fish. Catching fish isn’t actually a challenge. The see is overloaded with a lot of them so it’s highly unlikely that your hook will return without a fish caught. The only control in this gameplay is thus the simple tap to release the fishing line into the sea and moving it around inside the water as you try to catch fish.

While all of this seems pretty simple, there are a few things to consider. Players start out with a fishing line that can catch only 3 fish maximum. This can be increased by spending the dollars you’ve collected through your fishing adventures. In this way you can slowly increase the amount of maximum fish capacity of your fishing line for more scores and more in-game currency.

Similarly, there’s an option to increase the depth at which you fish. Initially you start out shallow where the most basic kind of fishes can be caught. By spending the in-game currency, you can increase this depth as well to catch a more colorful variety of fishes. As you go deeper in the sea, you’ll come across the more rare type of fishes. This is where Go Fish really gets interesting. Instead of mindlessly trying to catch fish and make more money out of them, the game shifts to getting more and more rare variety of fishes instead. As you go deeper you encounter different fishes. These fishes can also be viewed in the trophy section of the game. Here you can keep a record of all the different kinds of fishes you’ve caught. Remember: the rarer the type, the higher your earnings will be.

Go Fish presents initially as a mindless, relaxing game but soon turns out to be moderately addicting. It does have the ad problem which is a constant thorn to the side. The overload of ad is frustrating. Not only are there constant banner ads throughout the game but a short video ad is also played after every few times you fish. This can grow annoying pretty quickly and break the entire mood of the game. Of course there’s an ad-free game that you can purchase but it doesn’t come off as particularly cheap.

Go Fish! is one of the top apps in the arcade app category, which belongs to Kwalee Ltd. It's last update was on 23 November 2018 and it has been already downloaded 1,000,000+ times. On the app store it has now 26,902 reviews. After you get to Go Fish! page on the app store, click install & enjoy it. 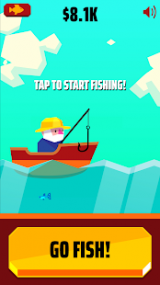 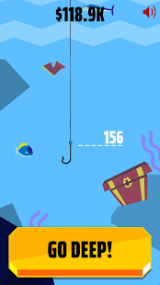 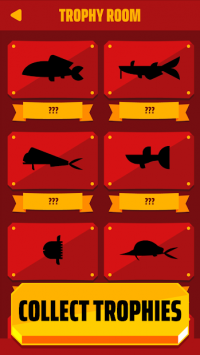