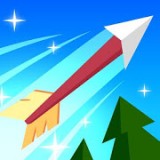 Voodoo is a popular game developer known for creating casual games that can easily make you want to pull your hair out and at the same time keep you hooked to your phone screen for hours. Flying Arrow fits this description aptly. It’s one of the harder games Voodoo has to offer and it’s certainly one that can be an excellent way to pass your time.

The core of Flying Arrow revolves around shooting a – well – flying arrow! Right from the beginning, after you’re asked to give permissions to the app to access your media and location details, you’re given a bow and an arrow to shoot.

There are no formal introductions or tutorials. You’re literally just blasted into the gameplay from the very start. This can be a little puzzling to new players who haven’t read the app description on the Google Play Store or the Apple Store beforehand. Most players will try to hit the targets laid across the landscape of the game but the objective of Flying Arrow is slightly different.

Your task in the game is to hit the furthest target you can. This means the more the distance you cover, the more points you earn. But there’s a catch – you need to avoid all and every obstacle laid down in the landscape. This not only includes the nearby targets you don’t want to hit but also the trees surrounding them.

The trees are the main cause of concern in the first landscape. There’s just too many and they are all difficult to avoid. The only controls the players have are the setting the right angle of the arrow, choosing the power of the shot and moving the arrow midair to avoid the obstacles by dragging it along the screen. While the last control might sound pretty helpful, in reality it’s not that useful. The arrow moves in the physics of a projectile motion so this means that the flight of your arrow is limited. You’ll notice it coming down pretty soon even if you shoot it in full power; at that moment, moving the arrow sideways to avoid a giant obstacle is futile.

Flying Arrow is a difficult game by most standards. It starts off as a seemingly easy one but in the first few shots, players will realize this is not the case. Leveling up in the game is a mammoth task in itself. And trying to get to the set number of points to proceed to the next level needs stamina, skill and a little bit of luck.

Players start off with a standard arrow but each time they level up, they are awarded with a new weapon that they can equip. This doesn’t necessarily only include arrows; you can get axes to shoot through your bow as well. The game features a handful of different landscapes. You start off in a forest and then proceed in a country side town and eventually make it to swamps and beaches. But you need to be a real expert in the game to discover the entire world of Flying Arrow.

The graphics are simplistic and pixelated. They aren’t too polished and almost seem clumsy. Despite this, the art does get the job done.

Like most free to play games, the chief complaint users have with Flying Arrow is – you guessed it! – Advertisements. Every second or third attempt at shooting your arrow, a long video ad will pop up and completely shatter your entire game tempo. Flying Arrow is already a difficult game to master and it can get frustrating quickly. Added to that, the ads can really make things worse and even force you to uninstall the game once and for all.

Why do we recommend Flying Arrow?

What can be improved in Flying Arrow? 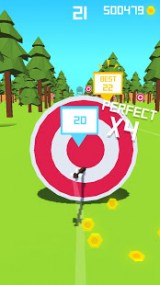 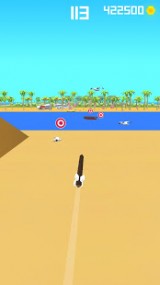 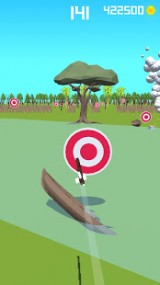