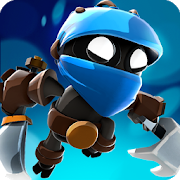 Badland Brawl is a free to play physics-based strategy game that includes theme of actions and a lot of tact. This game provides some impressive visuals which immediately make a great impression even before the gameplay unravels. The app contains a few in-app purchases that you can make to excel in the game but none of them are necessary. Available on both the Google Play Store and the iTunes store, Badland Brawl is slowly becoming one of the most loved games in the strategy genre.

This fast-paced strategy game supports an engaging multiplayer mode with chain reactions, action and a lot of fun. Packed with colorful features and perks, Badland Brawl is definitely the game to try out if you’re looking for something refreshing. The gaming format is unique and different and it stands out from the generic strategy physics-based games.

In Badland Brawl you can project your clones onto the battlefield. Correct timing is the key and correct aiming matters significantly to make progress in the game. Throughout the gameplay, players can build tactics and devastating chain reactions to destroy their enemies. These chain reactions can be produced with combining dozens of your clones and making a tactical ambush on your foe. Badland Brawl is essentially a PvP or player versus Player game with a lot of multiplayer fun.

You can invite your friends directly into the game and challenge them to a one on one duel. Alternatively you can challenge players from across the world in PvP battles to make a name on the leaderboard charts. Badland Brawl is a fun, engaging game that offers a host of features but the gameplay can only be mastered if you make every move strategically. Chain reactions are given a lot of importance in the game and they lead to the ultimate success of any match.

Set in the award-winning Badland universe, you can explore dozens of characters. You can also unlock different Badland eggs that can be collected and help you upgrade your clone characters. The gameplay itself is very physics-centered but the aspect of physics doesn’t always pan out. While the game is developed to near perfection, there are certain bugs and loopholes in the aspect of physics in the game.

Players can also join a certain tribe in the multiplayer mode, communicate with their tribe members and plan out their next brawl tactics. Badland Brawl features a homely community where you can socialize and challenge other players to duel for rewards. The in-game leaderboard charts are also great to keep track of your progress in the game and to see how you rank amongst other players in the game.

One additional feature Badland Brawl features is the BadTube which is a video streaming platform available inside the app. On BadTube, you can learn new tactics of the game and polish your skills. BadTube is definitely an innovative and refreshing feature that this strategy game proudly boasts.

Why do we recommend Badland Brawl?

What can be improved in Badland Brawl?

Badland Brawl is one of the top apps in the Strategy app category, which belongs to Frogmind. It's last update was on January 29, 2019 and it has been already downloaded 5,000,000+ times. On the app store it has now 197,705 reviews. After you get to Badland Brawl page on the app store, click install & enjoy it.