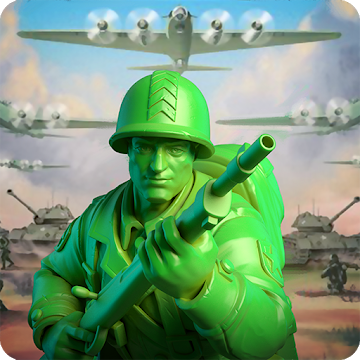 Toy Story has always been a childhood (and adult!) favorite Disney movie for many but not every character shared the same amount of time in the limelight as Woody and Buzz Lightyear. Remember those tiny green plastic army men? Yeah well, now it’s their time to shine. In a combative and fun strategy based gameplay, developers FightClub bring these toys to the battlefield in the app Army Men Strike. Unlike other war games, this one is inherently childish in terms of its graphics and storyline but when it comes to the actual battle plan and strategy, it’s no joke. Army Men Strike has received some amazing reviews on the Google Play Store and the iTunes store from its users. It’s a free to download app as well which makes things even better.

Army Men Strike sounds like a serious, no-nonsense game and perhaps for some players it is. But we just can’t ignore the fact that we’re actually just controlling a bunch of plastic toy army men and the battlefield is a child’s bedroom. Army Men Strike is one of those rare battle games that are completely appropriate for the younger audience. Of course it does instill themes of violence (after all, it is a war game) but there is absolutely no gore involved.

The objective in Army Men Strike is to defend your house and build a tower as your fortress. There’s a mini World War ongoing in the playroom and it’s your job to defend your tower and house. The initial setting of the game is based in a child’s bedroom (probably Andy’s). The game then progresses to areas outside the bedroom like the bathroom, the hallways, the living room, and even outside in the house backyard.

You can build a colorful army that not includes the classic green army men but also other toys with their own special abilities. Need an air force? No problem. The RC planes can be added to your army to defend you aerially. You can also add in rubber-ducks and transformer robots in your army, all to defend the house against the invasion of the enemy: the Evil Legion.

Army Men Strike is a shot in the past and is a sweet way to relive your childhood memories. Despite incorporating nostalgic moments, this game does require a certain level of tact and strategy to excel. You can wage wars and proceed in a strategic way to launch attacks on the Evil Legion. You can also build a strong headquarters in the bedroom where you can access the moneybox as your treasury for in-game currency and utilize transport resources. These transport resources include toy trains and planes.

As mentioned before, you can add a lot of different units to your army but you can also customize and upgrade the green army men to make them unique in their abilities and stronger on the battlefield. For example, you can equip certain units with snipers while others can control a tank. The tank, of course, is a powerful unit to have in your army! Army Men Strike is a pretty child-friendly game but it must be remembered that it can connect online. In fact, the multiplayer arena is one of the best features of the game. You can chat with other players around the world and you can form powerful alliances to make your battles more successful.

Army Men Strike has a 4+ star rating on the Google Play Store but it does have a few drawbacks that must be mentioned. Many users have reported that the game tends to glitch sometimes and occasionally faces bugs, which pretty much wipes all of their progress in the battle. This can be incredibly frustrating especially when you’re about to be the victor.

Why do we recommend Army Men Strike?

What can be improved in Army Men Strike?

Army Men Strike is one of the top apps in the games app category, which belongs to FightClub. It's last update was on 12 January 2019 and it has been already downloaded 10,000,000+ times. On the app store it has now 437,647 reviews. After you get to Army Men Strike page on the app store, click install & enjoy it.