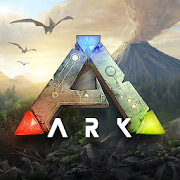 ARK: Survival Evolved is more than just a game built for smartphones; it is a full-fledged PC and console game so you can expect it to be a banger. ARK: Survival Evolved is an adventure game set in the era of dinosaurs. It challenges you to survive in a remote island that is populated with dinosaurs. The ultimate goal of the game is to be a survivor. ARK: Survival Evolved can be downloaded and played for free from the Google Play Store and the Apple Store. There are ads and in-app purchases that will make your gaming experience more diverse but they aren’t absolutely necessary.

Players begin in a remote and mysterious island without any weapons or resources. They gather and collect resources to build weapons and shelter and expand their domain by capturing dinosaurs. As already mentioned earlier, ARK: Survival Evolved features over 80 different dinosaur species that you can tame and train.

Players can also make friends with other ARK user through the giant multiplayer platform. They can create and expand their own tribes and they can build mighty structures to defend themselves against enemies and predators.

Feature-wise, ARK: Survival Evolved is rich. Apart from capturing, riding and training dinosaurs, you can discover the entire island that you’re in. You can explore different ecosystems in the game including the land, sea, air and even the world beneath the ground. This adds an RPG gaming perspective to ARK: Survival Evolved and makes it an all-rounder adventure came to have on your phone. Because of the variety of features this app offers, it is easily a very addicting game.

You can also gather resources to craft and build different items and building. You can make clothes, weapons and even large cities and other shelter for you to live in.

Tribes are a great means to form new alliances and expand your domain. You can also share and trade your resources with your tribe members and you can even share your experience points (XP).

Although most of the content in ARK is available for free, you can make the game more exciting by subscribing to the Primal Pass subscription on a monthly or yearly basis. This premium pass offers a whole lot of unlimited features, removes all ads and gives you double the amount of XP you’d otherwise earn.

ARK: Survival Evolved is loaded with content but there’s a catch – you need a pretty powerful system to run this game. Android phones with less than 3 GB RAM space will not be able to run the app. Only the top most smartphones in the market with a powerful processor will be able to run the game without it lagging.