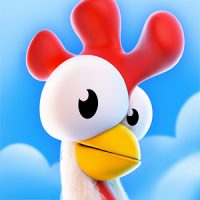 You wouldn’t think a farming game would excite kids and adults but Hay Day by Supercell sets high standards. With over one hundred million downloads, Hay Day is probably the best farming simulation game there is on both the Google Play Store and the iTunes store. What is it that makes it so special? Let’s find out

Players are given an area of fertile land where they are supposed to lay the land, crop and trade the products with friends. The crops never die even though it never rains. Hay sounds like a pretty simple game when you read what it’s about. In fact some might argue it’s too simple and boring but the element of addiction does drop in it and there are a couple of reasons why.

For starters, Hay Day offers tons of customization options. This way, players can build their farm according to their personal preference. Players can grow whichever crop they please and can afford. They can also expand their farm and make it look premium. Players can also raise animals and at higher levels, cook up cakes, popcorn, pies and create woolen sweaters.

Another interesting aspect of Hay Day is that it facilitates socializing within the game without losing the touch of the farming feel. In the game, you can trade the crops you grow and your goods with neighboring farms and friends. This can all be done through the tiny trading shop on the roadside which many users have deemed as the best part of the game.

Hay Day also supports event-like challenges. Instead of just growing your farm without a purpose, players can take up orders and fulfill them with their trucks or their steamboats.

Speaking of which, the farm isn’t restricted to a dry piece of land only. You can also build and repair your dock and do fishing in the river nearby. As the levels progress, you can also unlock a mine and mine ore from it as a resource to grow more crops.

As your farm grows, you can eventually build an entire town and welcome your visitors making the game much more RPG-like. The game progresses level by level. Players can only visit other farms until level 29 and request items from them through a newspaper ad. Once you hit level 29 and above, you can unlock the neighborhood mode where you can interact with the entire Hay Day farming community.

The game is also only appropriate for children above 13 years of age because it allows players to interact with their friends and strangers in the neighborhood community feature. This chat is more or less not moderated with only a basic filter for language. The chat, however, can be disabled.

Hay Day offers cinematic graphics that serve as eye candy for players. Its visually stimulating graphics can keep you hooked on it for months.

Hay Day is an engaging farming app that adds color to the otherwise boring topic of farming. If you’re a fan of simulation games then Supercell’s hit Hay Day game can be your favorite. 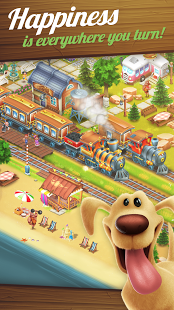 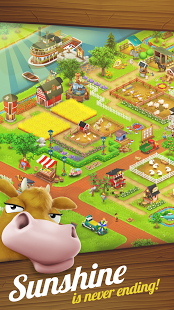 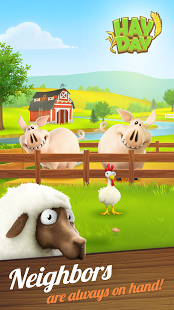 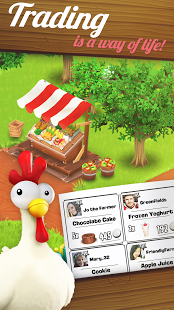 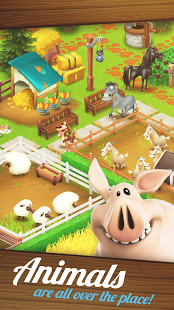