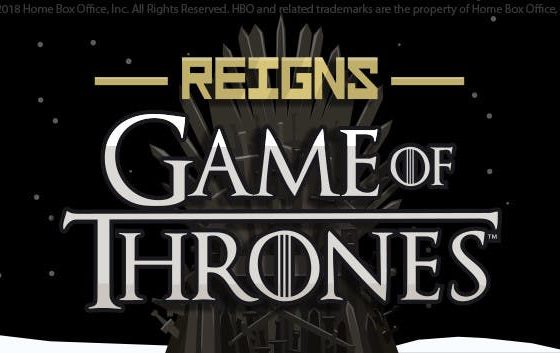 Nerial has done it again and released a brand-new entry to its Reigns series, but now in the form of a not anticipated but very well received Game of Thrones spin-off. The chance to sit in the Iron Throne is now available as of October 18, where you get to role-play as every one of your favorite GOT characters who have a claim to the throne, giving you the opportunity to play out thousands of potential futures for all your favorite characters. Its gameplay remains exactly as its predecessors, which means your decisions as a ruler will be chosen in a Tinder-like manner, swiping left or right on cards with different scenarios on them. Correspondingly, the choices you make may affect your popularity with the church (which is the High Sept within the lore), your army, the Iron Bank, and the townspeople’s opinion of you. Keep them all in check and well balanced, and your reign will thrive, but fail to do so, and your death will be as swift and merciless as most of the TV series famous murders. Having too much or too little of each element will result in a different death, so always expect the unexpected.

You’ll be first introduced to the hypothetical GOT scenario where you’ll be hastily informed of Cersei Lannister’s eviction of King’s Landing, and this is where you’ll first take the role of a character, who is none other than Mother of Dragons, Daenerys Targaryen. Her much predicted reign hardly lasts, and the actual game kicks off with Red Priestess Melisandre, who will be given the role to cast the true heir to the Iron Throne by way of asking R’hilo, the Lord of Light, which of them is worthy of the crown. GOT fans will know the true nature of said God, whose powers involve bestowing unnatural long life and reincarnation to its followers, so the respawn ability granted to you not only seems legitimate within the lore, but very much feasible to happen. This means that, as a player, you get to be born time and time again in order to rule Westeros, or at least try to sit on the throne. With nine playable characters, there’s too much to explore before finding out who could be the next “Azor Ahai”.

As it is expected, each character you get to play at has its advantages and disadvantages, for each possible leader has its own goals, allies or enemies, thus broadening the many paths you can take as a larger and exciting story progressively unfolds. This trait allows you to humor yourself into experimenting through all the likely fan theories and long held believes, roleplaying the characters based on their assumed roles, as well as crafting your own personality to each character in a very fanfiction style.

The game may differ from its predecessors in its ability to generate branching decisions, which means the beginning or end of a war or alliance may result in cumulative effects, resulting in unexpected travels and twists within your path.

What might however be seen as a game with endless card turnarounds, actually results in surprisingly repetitive scenarios over and over again, and even if most of them seem trivial and unimportant when compared to the bigger scheme, it makes the experience of each round all-too familiar after you’ve played a few times. Casual tavern conversations and bribing are always articulated in the same manner no matter the character you play as, so a certain lack of individuality can be perceived after playing the game for long periods of time (which you surely will), and this will only be interrupted after you finally get to the real purpose of the game, obviously involving White Walkers.

Last but not least, the game’s minimal art style is what will probably make up your mind on spending money on the app, for its simplistic yet recognizable cartoons of each character surely bring the GOT universe down to a whole different but very stylish and interesting dimension. Certain aspects like using the complete score from the TV series blended with smooth remixes are also worthy of noting, as it is a feature every fan will surely rave about.

It is safe to say this is one of the best games to be set within the world of Game of Thrones, not only for flawlessly following the entire plot of the series (and perhaps giving a bit more to chew on), but also for capturing the entire dynamics of its politics and its intricate way of working. Moreover, the essence found within the previous games remains intact, which makes Reigns: Game of Thrones the perfect termination to an immaculate trilogy.