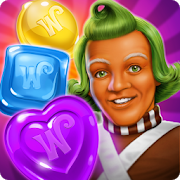 Adapted from the timeless children book classic by Roald Dahl, Wonka’s World of Candy brings us an all new take on the match-3 puzzle sequence for smartphones. This free to download casual slash puzzle game is familiar to match-3 hits like Candy Crush but different in all other aspects. Fans of Mr. Willy Wonka’s world are bound to get a treat from this game. If you’re one of them, download now from either the Google Play Store or the Apple’s iTune store.

Wonka’s World of Candy incorporates the world from the famous children’s book, Charlie and the Chocolate Factory written by Roald Dahl. This book was also adapted into a highly popular hit movie several years ago starring Johnny Depp. But if you were looking for a Johnny Depp lookalike in Wonka’s World of Candy, you’re searching in the wrong place. Although adapted from the same story, this app by Zynga features completely different character designs with a green-headed Mr. Willy Wonka. The Chocolate Factory is also quite different and much more elaborate than that shown in the movie or depicted in the book. However, the characters including the Oompa Loompas are present and the storyline follows closely to the original one.

The game itself is a match-3 puzzle format which really needs no formal introductions. All you need to do is pair 3 matching pieces (in this case candies) and make them blast to score. Each level has the same gaming format but different objectives to clear the game. There are also power-ups and special candies and perks in the levels to break the monotony. Wonka’s World of Candy begins as a pretty chill and casual game but the levels quickly grow in challenge.

You can also unlock different chapters to and rooms in the chocolate factory world. Plus, this game offers tons of customization options that give this match-3 puzzle game a slightly different perspective. As you clear the levels, you’re constantly rewarded with features and items that you can add to decorate the chocolate factory. You can unlock multiple items and customize spaces like the Chocolate Room, Fizzy Lifting Drinks Room and other new places in the chocolate factory. You can also discover an animal factory within the world in the form of chocolate, vanilla or strawberry milk cows, golden geese and even cotton candy sheep.

Players can also collect more power-ups along the course of the game. This can be done through collecting sugar bags after every level to start up the chocolate candy machine.

The features in Wonka’s World of Candy are limitless and provide and unending supply of entertainment. It’s also a hit of nostalgia as you follow the same characters and their storylines in the game. You can also watch as the Oompa Loopas work in the factory although their songs and dances are missing. The game also features several cut scenes to always keep the story of the game imminent. But at the end of the day, Wonka’s World of Candy is a match-3 puzzle game with the same format that we have seen a million times before.

Surprisingly this game isn’t available to everyone despite being free. The limited geographical support is strange for an app like this and keeps it from hitting the charts. Despite this, Wonka’s World of Candy is an addictive affair but it does lack a particular punch.

Why do we recommend Wonka’s World of Candy?

What can be improved in Wonka’s World of Candy? 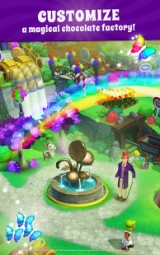 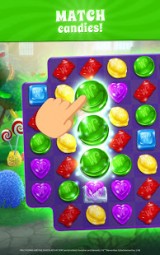 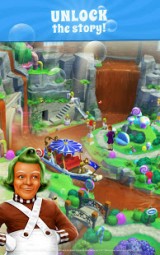 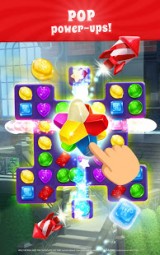