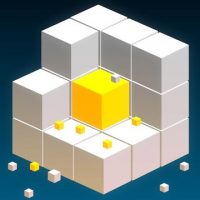 On first look, The Cube is highly reminiscent of Minecraft. The graphics are similar and the pixelated cubes featured in both games are alike. But while Minecraft’s world is huge and immersive with countless things to do, The Cube is more or less an idle game.

Although officially categorized as an arcade game, there’s really no proper gameplay in The Cube. It’s a great time waster and it’s easy to play. But there’s no objective. No moving forward. No complexities.

Your job as a player is to break apart a pixelated cube and reveal the chest box inside. This treasure chest can have any random item. It could be coins, diamonds, hammers, mallets or a booster. It’s the curiosity of what’s inside each treasure chest is what keeps players hooked to the game.

Breaking apart this cube is no problem at all. You don’t need to solve any puzzle or approach the chest strategically. You simply need to tap all the blocks of the cubes away as you mine in for the chest box. Bear in mind that even when the chest box is visible you can’t open it or access it until each and every one of the blocks around the cube have successfully been destroyed.

When you first run this app, you’ll immediately be directed into the game. There are no formal tutorials or a how to work the game. You’ll need to figure it out on your own. This can be confusing for players especially since they are all trying to find an actual challenge in the game which is pretty much missing. All that needs to be done is tap and break the cube. You can, however, see the control instructions by tapping the small question mark icon on the left side of the screen.

The cube you begin breaking in level one is initially tiny in size but as you proceed further into the levels, the cube grows exponentially in size requiring more time and energy to break it apart and reveal the treasure chest inside. Players can utilize different boosters by watching videos to destroy the cube faster.

Alternatively, you can also make use of the different tools you find in the chest. These could be a hammer or a mallet etc. More tools and items can be found later in the levels.

Overall, The Cube is a fun game for those who are looking for a seriously casual and idle game. But The Cube can quickly grow infuriating, robbing the fun of the casual game it poses to be.

The mammoth quantity of advertisements this app plays is seriously frustrating and might even force you to uninstall the game the same day you download it. We understand that apps need to run ads to make their money but when there’s an overload and a long video ad after every single cube you break, there’s really no excuse. Not only are there video ads popping up all the time when you’re having fun obliterating the cube, there are also ads in the banner that hinder the game screen. Apart from the ads, The Cube also crashes and freezes quite frequently.

Why do we recommend The Cube?

What can be improved in The Cube? 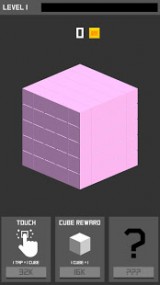 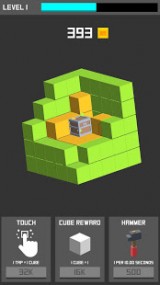 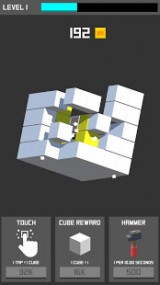 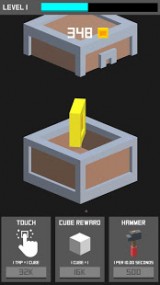