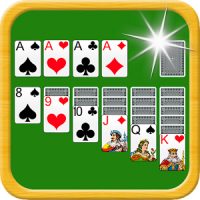 Solitaire has been one of those games that we would play to spend countless hours glued to our Windows ’95 PC screens. Even before the inception of modern PC systems and smart devices, this card game had been the front runner of PC games. And why not? Solitaire on PC brought the actual physical card game to our computer screens and we couldn’t be more excited. Since then, the game of solitaire has been reinvented by many game developers but the Solitaire app by MobilityWare is by far the best and the most authentic rendition of the classic card game.

Solitaire by MobilityWare supports a giant online multiplayer system with over 100 million users alone on Android. This is a major difference and one we seriously adore in this app of the classic card game. On PCs, the only option you had was to play with yourself or against a CPU player. But the Solitaire app changes this and brings in a lot more challenges for players to enjoy. The actual gameplay and rules of Solitaire are the same as the original card game. Your objective is to make four entire sets of red and black alternating colors to win. The deck featured in the app is the same, classic deck with no special cards or bonus features. This is what makes Solitaire such a hit with most players because it keeps so many things original without any unnecessary spins or twists. The app does, however, add a few advancements but nothing that digress too far away from the original card game. Players can choose to play with the play 1 and draw rule or they can follow the classic Klondike & Patience Solitaire rules of drawing 3 consecutive cards to play.

Solitaire is a game that is based on luck mostly. But the game does grow more challenging when you make a lot of winning streaks. The algorithms of the cards and their probability of appearing in the right places change which makes the difficulty level of the game steadily rise.

There’s also a scoring counter in the game which follows the Vegas Cumulative Scoring system. This is a great way to keep tabs on your progress and see how well you’re doing in the game. The counter is placed in the main game screen throughout the game. Perhaps the best part of this app version of the classic card game is the multiplayer support. In this Solitaire app you can play against actual real online players. The challenge is mostly a race type of challenge and the winner is whoever finishes the game first. You can also track your records through the in-game leaderboard charts.

Solitaire also offers some customization elements. For example, the cards and the tables in the game can be fully customized. You also don’t really need an active internet connection to play this card game app unless you choose to play online against your friends. The app also offers tons of daily challenges for the players to keep their interest. Solitaire by MobilityWare is a solid card game app and has managed to receive a lot of positive feedback. There have been some technical issues with the recent updates of the app and many users have come forward to complain about it. Also, there’s always the problem of a lot of in-game apps as is the issue with the majority of free to play games. 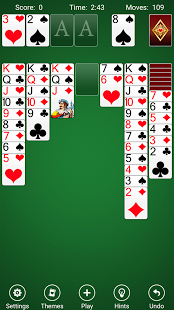 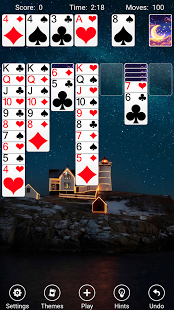 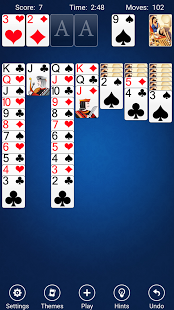 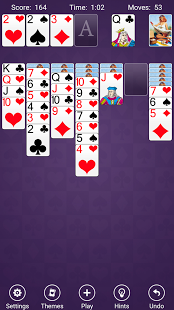 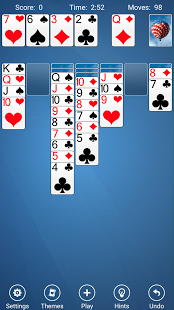