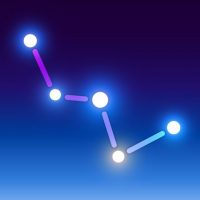 There are only a handful of apps on the app stores that satiate the curiosity and passion of astronomy enthusiasts with such precision; Sky Guide definitely makes it into the list. Sky Guide is a sophisticated app, close to perfection, and one that gives an accurate outlook into the constellation. With informational details and illustrations, and an advanced technology that reads the sky above you, Sky Guide is definitely one of our favorite stellar-centered app. Although it is a paid app and has to be purchased from both iTunes and the Google Play Store, hobby astronomers will find this to be wonderful purchase and an app that will stay in their smartphones for a long time.

Sky Guide does what its name says: it gives you an insight or a guide into the constellation lines, boundaries and star identification. The app facilitates a fully user-friendly, configurable celestial map that detects constellations and other extraterrestrial objects in the sky with a limit magnitude of 6.3. These identified objects are those that the naked eye can pick up or even a small telescope. The details Sky Guide picks up is quite extraordinary and worth praising. The place, direction and time of the observation can also be recorded and manually configured in the live-mode to get an even better look into the stars. The brains behind this live mode feature are the added GPS sensor and real-time and compass guides.

Once a star or a celestial object is identified and picked up by the app, you can explore more into its details by the helpful information displayed about it. This additional information can increase your knowledge regarding fixed stars, deep sky objects, a planet, moon, sun or even an entire meteorite shower. Moreover, the information is collected from the Bright Star Catalogue and the Washington Double Star Catalogue and made available to users of the Sky Guide applications. Plus, users can also add their own notes and details to each constellation or celestial object that they identify.

Not only can you directly get the overview of your night sky and its celestial constituents by holding the built-in app camera up to the sky in the live mode (which by the way is the major wow factor of the app), but the powerful search tool incorporated into the app can also come in handy. This search filter lets you alighn the map to a specific object or guide the observer in the live mode. You can also search for the traditional names of the stars in the library or for a catalog designation and even an entire constellation.

There are a number of other added features in the Sky Guide application that make it even more versatile. These star-centered tools include an astronomical event calculator and calendar whereby you can calculate estimate when a certain celestial object will become visible; the orbit diagram is also an educational option in the Sky Guide app to help you navigate your way around the milky way; the moor viewer is a scalable, geocentric or topocentric moon projection that lets users accurately describe moon phases, positioning and angles; and the ephemerides generator is another feature that lets you keep a diary of the positions of naturally occurring astronomical objects.

The app can be considered a flawless masterpiece for astronomy enthusiasts but it isn’t free of criticism as well. Despite being a paid app, there are other in-app purchases you have to make to access some bonus features in the app such as satellite tracking. Some users have also complained that the app simply does not deliver the same results on an Android device as it does on an iPhone so it might not be the best buy for you if you have an Android smart phone.

Why do we recommend Sky Guide?