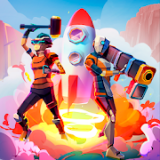 Immerse in an online multiplayer shooter battle royale in Rocket Royale. OneTonGames brings Android and iOS gamers a battle royale based game with unique graphics, intense action and tons of weapons to choose from and equip. Rocket Royale sits comfortably in one of the top battle royale games for smartphones. It has over 1 million downloads on the Google Play Store alone with over 4.2-star rating.

A year ago, Fortnite literally blew up the universe of gaming with its inexplicably addictive gameplay, huge online multiplayer base and spectacular controls. Many games in the battle royale category have since popped up and gather inspiration from Fortnite.

Rocket Royale is also one of them and unlike most of the copycats, this one actually stands a solid chance with Fortnite fans. What’s Rocket Royale about anyway? In the game, you’re instantly projected into a vast multiplayer world – a world in chaos and one that is slowly dying. Your task is to make it through and survive the apocalypse. This means it’s a survival of the fittest. The good part is everyone with skill and expertise with a gun has a pretty good chance of survival.

There are only two ways you can escape the falling world featured in Rocket Royale: either you gather enough gears and resources, build a rocket and fly to another world OR you can choose to stay on the battlefield and battle it out with other players to survive. The latter way is obviously more difficult but that’s what Rocket Royale is all about – the intense online multiplayer shooter format of the game.

Surviving in Rocket Royale is more than just mindless shooting and taking down your targets without a plan. It involves tact and strategy, and a methodical approach to win. You not only need to be on an offensive position but you need to defend yourself just as much by building strong covers and shields around you. In short, Rocket Royale is about being tactical, smart and highly creative.

As you progress through the game, you acquire more skills and weapons to make your characters stronger and a formidable presence on the sandbox battlefield. The more you upgrade, the higher your chances are at surviving the catastrophic world featured in the game.

Rocket Royale also offers players a chance to explore the landscape, gather loot and gear, craft covers and of course, shoot. The game features over twenty different weapons to choose from and equip each with its own range, rarity, parameters and attachments. But you’ll need to unlock these weapons one by one as you progress through the game. Or you could go the easy way and buy them with the in-app purchases. Plus, not only can you just equip your weapons, you can also upgrade them so that even the list of twenty weapons seems big enough.

Rocket Royale has graphics that are reminiscent of the popular Minecraft series. It has the same pixelated box-like characters that make the game entertaining, unique and simple. However, players who aren’t fond of these type of graphics may not find the game visually appealing.

The app is big in size (around a 100 MB) and takes up a decent amount of space on your phone. It is, however, free to download. You can always make use of the in-app purchases in the game as well but these are not as heavily promoted as many other free to play games.

There are certain problems with the app though. For example, it has been reported to crash and glitch quite frequently. Users have also complained that the game has too many third-party advertisements and has slow or poor updates.

Why do we recommend Rocket Royale?

What can be improved in Rocket Royale?