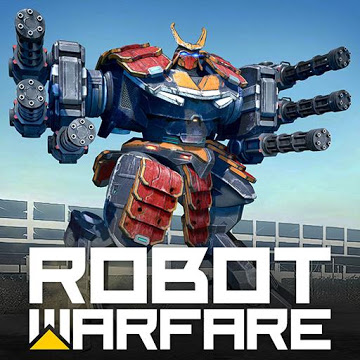 First person shooter games have created waves in the gaming industry ever since the inception of counterstrike and similar hits. We would have never imagined smartphone games to bring the same caliber of FPS experience to us but Robot Warfare Online definitely does not disappoint. This massive multiplayer online FBS shooting game revolves around robots and guns – a masterful combination of science fiction and action. Available to download for free from the app stores, Robot Warfare Online is one of the most loved FPS games in smartphones today.

As the name correctly depicts, this game is all about robots raging a war on its own kind. You can select your own custom robot and bring it to the battlefield to take down your enemies. Robot Warfare has a colorful variety of robots to offer and players can choose from up to sixteen original mechas. These include names like Spirit, Titan, Phantom, Paladin and many more. All of the robots have their own unique skills and ability that make them a great option to take to war if you’ve planned your strategies correctly. The range of skills each robot has includes speed, jumping height and the quality of the weapons they use to shoot with at the foes.

Robot Warfare Online is, strictly speaking, an online multiplayer game. There are several different modes to choose from including the team battle, death match, training mode, capture points and custom game. In the team battle mode you join a team of other robots that are controlled by players across the world. The goal is to eradicate the opponent team and score the highest to win each round. The death match mode pits players against one another and it’s the battle of survival to get the title of the victor. Capture Points is another premade multiplayer mode where players work in teams to collect and defend their points in the game.

Custom Games is a mode where you can create your own custom game and play by your own rules. You can invite your friends or other players to join in your custom game to play together. The last and final mode is the Battle with Bots which quite literally pits you against computer bots. This is more of a training mode to improve your skills in the game and reap rewards. Customization plays an important part in Robot Warfare Online and players can upgrade their weapons, robots and create custom games to add a more personal touch to their experience. As in all other FPS games the controls in Robot Warfare Online are classic. You need to control your weapon and movement through swiping the screen and shooting and jumping through their dedicated options.

Robot Warfare Online boasts some pretty impeccable graphics backed with phenomenal sound tracks and music that completely absorb you into the mood of the game. FPS robot lovers are in for a grand treat with this game for sure because it delivers almost everything a good multiplayer FPS game should and it checks all our boxes in terms of graphics, customization and ease of controls. What’s more, the user interface and app design are definitely executed with perfection.

Robot Warfare Online does have a few ads here and there but the real problem comes with the updates. Some users have experienced a loss in their progress after they updated their app while others face lag issues. There’s also no chat feature in the game which can be a con for those who enjoy chatting with other players in the multiplayer modes.

Why do we recommend Robot Warfare Online?

What can be improved in Robot Warfare Online?