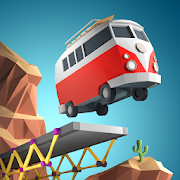 Originally a game for PC, Poly Bridge is an interesting bridge building simulator that tests the limits of your creativity and your knowledge of physics. Developed by Dry Cactus, this gorgeous game is a master piece on many accounts. Not only is the gameplay highly stimulating but the graphics are a visual candy to the eye. It won’t really be fair to compare the mobile version to PC because the PC versions are almost always better. Poly Bridge, however, checks most of the boxes for a smartphone game and we’re not complaining. You’ll have to pay a small amount to download the game but once you do you’ll enjoy and ad-free experience with no in-app purchases. The game can be downloaded from the Google Play Store and Apple’s iTunes Store.

Poly Bridge is categorized as an indie bridge building game that revolves around the main principles of physics. It’s a pretty long game too so you won’t be done with it too soon. The app offers dozens of hours of gameplay and unique levels that help you unleash your creativity and you inner engineer.

In total, Poly Bridge has about 105 campaign levels that have their own unique tweaks and landscapes. The ultimate objective you have in each level is to make a sturdy bridge that can help vehicles across. In order for your bridge to be successful it needs to not only be powerful but properly engineered so there’s no risk of accident. The sandbox gameplay controls allows you to build a bridge from scratch starting with a blueprint. You then have a couple of controls to adjust the height, the position, checkpoints, rotation, time delay and more.

Poly Bridge might seem like a pretty complex game especially when it comes to the actual bridge building aspect of the game (which is basically the core of it). In reality, though, this pay to play PC and mobile game is fun and not that complicated. Sure, you’ll require a certain amount of engineering expertise and skill to really get through the levels but once you get the hang of the controls, you’ll be able to build bridges easily. Engineers and other physics-oriented individuals might find Poly Bridge much more fun than others.

Bridge building in Poly Bridge also includes some cool features such as hydraulic pistons, swinging bridges, moving drawbridges and classic varieties. There are also a cool number of vehicles that you have to transport to the other side of the bridge. The levels are also pretty unique with their own set of scenery.

Speaking of which, Poly Bridge has some pretty amazing graphics. The art isn’t all out 3D but the soft water color touch is definitely an eye candy. It’s also backed up with soothing tunes that can help you concentrate and keep you absorbed in the game. The PC version of Poly Bridge, however, boasts better graphics but the difference isn’t too prominent. You can still enjoy this app on your mobile or tablet without feeling too much of a change. The only thing you might need adjusting to is the controls on the smartphone. Controls are much better on PC but they can be worked with on the mobile.

You can also unlock several (22 to be exact) achievements in Poly Bridge and share your progress with your friends.

What can be improved in Poly Bridge?

Poly Bridge is one of the top apps in the Strategy app category, which belongs to Dry Cactus Limited. It's last update was on April 17, 2018 and it has been already downloaded 100,000+ times. On the app store it has now 5,017 reviews. After you get to Poly Bridge page on the app store, click install & enjoy it.