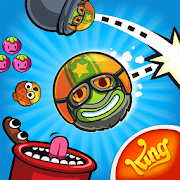 Anything that comes out of the developers King is bound to be highly addictive and Papa Pear Saga is no exception. King is known to produce some groundbreaking match three puzzle games like the worldwide phenomena of Candy Crush but strangely enough Papa Pear Saga is at a whole different trajectory. This game doesn’t abide by the classic match three rules and has a completely unique gameplay of its own. Available on the Google Play Store and the iTunes store, Papa Pear Saga is a free to download game that offers some in-app purchases to make the game easier.

Papa Pear Saga revolves around cannons shooting pears shaped like the main character of the game, Papa, with the goal of clearing the particular objectives of each level and ultimately landing in a cauldron at the bottom. Dispersed across the screen are other smaller pears that you can hit to get bigger and better score. Along the way new items will be introduced to you including carrots, radishes, pomegranate and some other things that probably don’t even make sense. Hitting an excess of pears in each level will earn you points but points aren’t everything in this game.

Just like King’s other games, each level in Papa Pear Saga comes with a distinct objective that you need to complete in order to clear the level. This could be making a certain number of score points, landing your Papa pear in each of the five cauldrons, dislodging and throwing giant fruits in the cauldrons and more. As you progress through the game, the challenge gets tougher and you’re met with objectives that require strategy and perfect aim to clear instead of just mindless shooting. Papa Pear Saga relies heavily on the direction of your aim, and the basic physics of bouncing mechanics.

You can also score a star rating for your performance in each level just as you would do in a level of Candy Crush. The only difference is that it’s actually much easier to score a three star rating in Papa Pear Saga as opposed to Candy Crush – at least in the first few levels.

Keeping with their classic map integration in their games, King brings a map like structure to Papa Pear Saga as well where you can freely move around and play whichever level you’ve already cleared. It also gives you a good idea of how extensive the game is and it’s not surprising that it’s pretty long. King is known to make games with an endless number of levels that keep you glued and addicted to your smartphones.

In Papa Pear Saga you can also avail some special effects and boosters that make the game more interesting and break the monotony that might develop. You also get only 5 lives in the fame and once your lives have exhausted, you’ll need to wait a good amount of hours before you can try again. Alternatively you can also buy lives with actual money.

There’s also a separate map for special quests and challenges that are not affected by the number of your lives you have. This is something Candy Crush doesn’t enjoy and it lets fans of the game play Papa Pear Saga in an endless loop.

The graphics of this game are pretty great too albeit slightly immature. The game screen of the level itself is pretty zoomed out but you eventually get used to it. Sound effects in Papa Pear Saga are ideal and fit perfectly with the silly, informal mood of the game.

One thing to remember is that you can’t save your progress in the game unless you register to the game with your email or your Facebook account. There have also been reports of some of the very advanced levels crashing and facing technical glitches.

Why do we recommend Papa Pear Saga?

What can be improved in Papa Pear Saga?