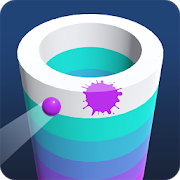 Paint Hit is a casual game by definition – one that can be picked up any time, played for a few minutes to hours to pass time in an enjoyable manner. This game is developed by MAG Interactive and it requires little to no brain power. But it does require a serious amount of focus, accuracy and speed. Paint Hit is a fun casual game with a large fan base. Its simple and easy play-through is the reason behind its success.

When you run the app, you’ll immediately be shot into the first level. There’s literally no tutorial or introduction given and perhaps it’s not even needed. You can get the hang of the game in the first two or three attempts so really a tutorial isn’t necessary.

All you need to do is shoot a paint ball at a rotating cylindrical tower. The objective is to shoot at the right time. Timing is the key in the game. No manual aiming is involved. The rotating cylinder will rotate randomly. It can move clockwise or anticlockwise, at low or high speeds. As a player, you need to watch out for its movement and make sure you hit at the right spot.

The unpainted part of the cylinder needs to be hit and colored with the set number of paintballs given to you. If you hit a colored spot, it’s game over and you have to start over the level completely. There are no lives – once you fail a level, you need to redo it from the beginning.

The rotating cylinder grows in height every time one circle is painted completely. In the later levels, this paint tower stacks so high that restarting the level at a high height can be infuriating.

The game has simplistic graphics. The backgrounds are subtle and the music is engaging. All of these elements complement perfectly to the feel of the game.

Paint Hit is a challenging casual game. It’s entertaining, no doubt about that. But it can rapidly grow frustrating. There’s an adrenaline rush to the game every time you shoot a paint ball correctly or barely miss a colored spot. The first level is pretty basic but players will find the game getting immediately difficult even from level 2 onwards.

Like most games, Paint Hit offers some bonus goodies to make the game easier. Interspersed in the rotating tower are gems that you can collect by shooting them with paint balls. You can also purchase these gems via the shop built inside the game. There’s also an option to unlock treasure chests after a set number of levels have been successfully cleared.

You can also view your stats in the statistics page that can be accessed through the main home page. The stats will tell you how many attempts you’ve made, how many successes you’ve had and how many times you’ve failed amongst other things. Paint Hit is a free to play game that requires no internet connection. It does offer a few in-app purchases that can be used to clear levels more easily.

Advertisements are the main problem in Paint Hit. These ads obscure the game and appear in the banners (although a banner-free version is available but you need to buy it!). Long 30-second ads also pop up after a few levels that break the tempo the game builds for you.

Why do we recommend Paint Hit?

What can be improved in Paint Hit? 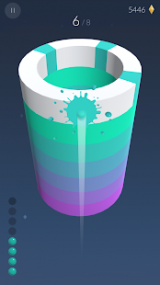 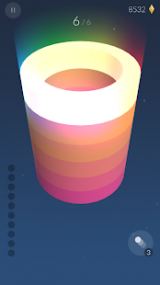 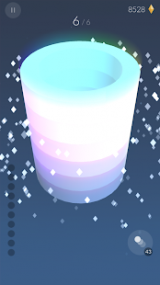 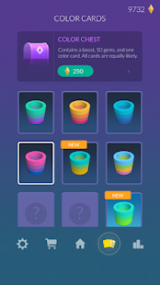