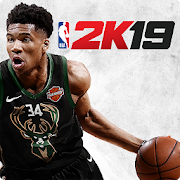 The NBA 2K series does justice to basketball. It’s undeniably one of the most successful games in the genre and the latest NBA 2k18 edition to the NBA 2K series is probably the best executed. The smooth gameplay, a wide range of gaming modes and excellent graphics all make for an all-rounder game. NBA 2K is a paid game that on both the Google Play Store and iTunes.

NBA 2K18 marries an addicting gameplay with some phenomenal graphics. We’ll get to the visuals a bit later but first let’s talk about what the game actually brings us in terms of the actual gaming format. Like its predecessors, this edition of the NBA 2K series has different gaming modes including Blacktop, Quick Game, MyCareer and Season. All of these gaming modes have their own special features which make the game a complete basketball experience on smartphones.

MyCareer is the basic story or campaign mode where users get to play as a basketball player that they can create and customize themselves. This means you can choose how your basketball player looks and appears for a more personalized effect. This mode features four different college games that you have to play in one of the 30 teams. Through this gaming mode you can sign deals and make friends. You can even train to further hone your abilities and polish your sport.

The Blacktop mode comes with an exciting concept. With the same player that you’ve created on the MyCareer mode, you can challenge other real players from across the globe to a basketball showdown. The Blacktop connects you with the internet and you have the option to either play one on one, or you can play against an entire team by joining a team yourself.

NBA 2K as always features pretty simple controls but ones that need skill in mastering. Although the game was originally developed for gaming consoles, the mobile version still gives a good impression when it comes to the control. The virtual joystick on the screen is all you need to make your moves including sprinting, dribbling the ball and jumping. Some of the earlier versions of this game had issues with controls lagging and the game crashing but NBA 2k18 improves in this area and manages to solve the lag issue to a great proportion.

The aesthetics of this app are also well-defined. The iOS version of NBA 2k18 especially is a visual treat and can be likened to the same level of graphic quality as its console counterpart. The transitions are smooth, the cut scenes are gorgeously detailed, and let’s not forget the absorbing sound track. Songs for the game are picked out intelligently and the game features some of the latest hits that fit perfectly as background for an NBA game.

NBA 2K18 has made some major improvements in both the gaming engine and the aesthetics. The lag issue has now been completely resolved and the graphics provide a pleasant and professional gaming experience for mobile users. What’s more, the variety of gaming modes adds to the appeal of this app and there are a lot of options to explore on NBA 2K18. It’s a game that will be in your phone for a pretty long time.

NBA 2K19 is one of the top apps in the Sports app category, which belongs to 2K, Inc.. It's last update was on and it has been already downloaded 31M times. On the app store it has now 3,272 reviews. After you get to NBA 2K19 page on the app store, click install & enjoy it.