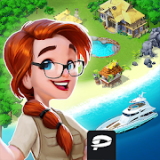 Lost Island: Blast Adventure puts an interesting spin on the classic match three puzzle gameplay. It also blends in customization and construction into it. With hundreds of levels to offer and various loveable characters to meet, Lost Island: Blast Adventure is easily one of the better puzzle games out there. In fact, it has had a consistent rating of over four stars on both the Google Play Store and the Apple Stores – and that’s saying something!

This game combines puzzles and base building with eye candy graphics and an entertaining plotline. As the title of the app applies, this game is set on a faraway island that is thought to be haunted by ancient spirits. It’s your job with your team of adventurous explorers to travel to the heart of the island and uncover all the mysteries it holds. On your journey you can transform this island full of jungles and beaches into a beautiful paradise of your dreams. All you need to do is succeed in puzzle games and the island is yours to decorate!

The puzzles featured in Lost Island: Blast Adventure closely resemble the match three strategy seen in games like Candy Crush. These puzzles are appropriately named as Blast puzzles because there are a lot of explosions going on after every victorious move. Traverse through the plot of the game by solving all of these puzzles one by one. The ease of difficulty of the levels slowly progresses and there could come a time when you might find yourself stuck in a level.

The other important element of Lost Island: Blast Adventure is the customization. You can build buildings, beaches and gardens and customize and decorate them to your liking. You can also call for repairs of the island to restore its natural beauty.

There’s more to Lost Island: Blast Adventure than just this though! The plot is thick and rich with characters you’ll fall in love with. One of the main ones is Ellie, the curious archeologist, as you team up with her to unearth all the secrets and mysteries of the ancient ruins on the island. Explore the island for resources like gold and treasure or find historical artifacts that will intrigue you. The plot also follows other friendly characters in the game. Most of these characters will present with an impending problem that you will have to help solve to fulfill their dreams.

Finally, there’s also your adorable little pet seal that you can play with, nurture and grow, and hunt for treasure with. Although Lost Island: Blast Adventure is a match three puzzle game by default, the added storyline, characters and numerous fun features make it much more than just your ordinary puzzle game. Perhaps these features also exist to break the monotony of the puzzle games and a little twist to it. Whatever the reason is for their existence, there’s still no denying that Lost Island: Blast Adventure is one versatile match three puzzle game to play and wile your hours away at.

The game is free to download and play although there are in-app purchases offered that can help you get out of a particularly difficult level or give you more customization options to make your island look even more beautiful.

While this app is not as greedy and cash grabbing as many (or most!) free apps on the Play Store, it does have its own share of criticism. Users have complained that the levels offered in the game are too limited and new levels are added very slowly. The app is also updated only occasionally which makes impatient players say goodbye to it from their phones once the existing levels have all been done.

Why do we recommend Lost Island: Blast Adventure?

What can be improved in Lost Island: Blast Adventure?