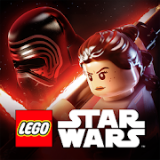 Star Wars has been a phenomenon in the world of sci-fi the same way LEGO has been in the universe of toys. Combine them together and you’ll get an Editor’s Choice, top rated smartphone game that can please all generations. LEGO Star Wars is a family friendly adventure on your smart devices that supports both iOS and Android systems. It is free to play and offers a magnitude of features, characters and a fresh Star Wars story line.

LEGO Star Wars keeps things classic by incorporating familiar plot and story of our favorite sci-fi series. It brings back all of the loved characters from the movies including Han Solo, Rey, Finn, Kylo Ren, Poe Dameron, BB-8 and General Hux. LEGO Star Wars isn’t the most fancy, high definition star wars game to exist but its unique LEGO graphics and wits make it a game a true Star Wars fan is sure to enjoy.

Speaking of, LEGO keeps its brand original in the game as well. The entire app is designed in the classic LEGO way with the same three dimensional block toy characters and fun laid across the game. The art is colorful, animated like a movie with a lot of interesting cut scenes to keep us constantly glued to our phone screens.

LEGO Star Wars revisits the story of The Force Awakens with new additions to the storyline that only make it better and more fun. Although the essence of the story of The Force Awakens is kept intact, the developers of this app throw in the popular LEGO wit and jokes in it to make it a clever and witty adventure for all. Plus there are some completely new timelines and plots that are original only to this game.

LEGO Star Wars doesn’t really fit into just one gameplay genre. It’s a mixture of adventure meets action. The gaming format of LEGO Star Wars is diverse as is expected of any LEGO game. At the end of the day, LEGO keeps the element of building alive in LEGO Star Wars. Players can choose from multiple building options to solve tricky puzzles and explore the galaxy of Star Wars. Every experience is this game is unique and this LEGO games offers diverse ways to make you enjoy it in your own special way.

You can maneuver your characters through the galaxy and engage in battles as well. This is where the action theme makes its entry. The battles, aptly named Blaster Battles, are an epic show of heroes versus the dark forces of the First Order. The battles feature high speed action packed fighting sequences that are somewhat new to a LEGO game. Most LEGO games are benign and free from elements of violence or fighting but LEGO Star Wars takes a different trajectory. However, despite the fights, LEGO Star Wars is still very family friendly and completely appropriate for ages 7 and up.

The developers of LEGO Star Wars continuously add new levels and features to the game to keep their app relevant. New characters are also rolled out throughout the year. Premium members, however, do enjoy these perks more and have a higher advantage over free players.

LEGO Star Wars easily makes a 4.2+ star rating on the Google Play Store alone. The only few complaints that come are regarding technical issues and the game sometimes freezing.

Why do we recommend LEGO Star Wars: The Force Awakens?

What can be improved in LEGO Star Wars: The Force Awakens?