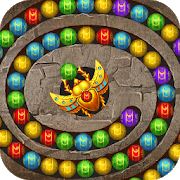 Jungle Marble Blast takes an interesting spin on ancient Egyptian mythology and brings us a highly addictive puzzle game. Everything from the gameplay to the graphics i well designed and thought with a great supply of levels and stages to clear. Jungle Marble Blast is free to download from the Google Play Store and iTunes with a bunch of in-app purchases that you can make to increase the quality of your experience in this game.

Although Jungle Marble Blast is categorized as a casual game it does have a fair amount of puzzle themes going in there with all the mixing, matching and combos. Every level in this Egyptian-themed game presents as a zigzagging or curved tunnel with marbles projecting out from the rear end of the path. Your goal is to make sure the marbles don’t make it to the end of the path or else it’s game over. To achieve this, you control a golden bug that apparently shoots lightening lasers out of its eyes. You can direct the bug in any angle from the center and shoot the marbles. The key is to make amazing color combinations and special effects to make the marbles blast altogether and produce a wonderful visual show as well as pave your way through to victory.

Currently Jungle Marble Blast has over 7 scenes or world with 140 different levels. The developers of the game are constantly adding more stages and updating the worlds featured in the game to make Jungle Marble Blast an indefinite phenomenon like Candy Crush. The potential for this game to get as addicting as Candy Crush is, however, debatable.

Jungle Marble Blast presents with a lot of fun where players can douse into a gameplay that rapidly progresses level after level but the game can quickly grow challenging and frustrating mainly because of the lack of color differentiation in the game. As mentioned already, to clear the path of marbles you need to make a splendid show of combinations that work mainly by color matching. But as the levels progress the colors of the marbles start mixing and you can’t really differentiate between two similar colors for example. This is especially an issue for someone who is color blind.

The app design itself is pretty artistic and keeps with the Egyptian jungle theme. The menu is colorful and professionally designed as are the graphics. The background music and sound effects also keep you absorbed into the true theme and environment of this game.

Jungle Marble Blast features a bunch of special effects and features to make levels more interesting as well. These include bombs, color balls, meteorite rain etc. The controls of Jungle Marble Blast are also fairly simple to understand and there are short and precise instructions in the beginning to teach you how the game works and what you need to accomplish.

You can control the golden bug simply by tapping on the area of the screen where you want to shoot the marbles. Matching three or more marbles will make them blast like all other match-3 puzzle games. You can also swap the shooting marble by tapping on the marble emitter. Additional props can be purchased from the in-game app store but you’ll have to spend real money on it.

Jungle Marble Blast is a free to download game and that means it comes with its fair share of advertisements that can quickly become a thorn to the side.

Why do we recommend Jungle Marble Blast?

What can be improved in Jungle Marble Blast?