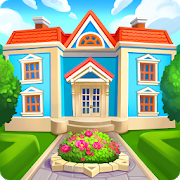 You’ve probably seen an ad of this game on YouTube or in another app. You’ve probably been curious to see what this Candy-Crush lookalike is all about. You’ve probably even considered download this Editor’s Choice application on the Google Play Store. Homescapes is a free to download and play casual game for both Android and iOS users. It reminds us strikingly of other match-3 giants like Candy Crush and the likes but Homescapes promises a unique twist on this classic puzzle game. Before you click that download button below, you might want to get to know what this app is all about.

In Homescapes, players help out Austin the butler to renovate and rebuild the comfort of his family’s mansion. The theme of Homescapes is tightly intertwined with that of an interior designing game but it’s nothing like Design Home or other games of that genre. Instead, players can decorate and reinvent this mansion simply by passing level after of match-3 puzzles. So although on the outside Homescapes gives an illusion of a lot more than just a match-3 puzzle game, the crux of it isn’t that far off from Candy Crush.

The graphics and art of Homescapes is exciting and vibrant. It’s full of color and three-dimensional that provides players a visual treat. The actions and movements of the puzzle games are smooth as well. Controls of Homescapes are pretty basic and all you need to do in this match-3 puzzle game is align three matching blocks of interior designing elements in a row to make them blast and score higher. Each level comes with a certain objective or a minimum point score that you have to meet in order to proceed to the next level. You also get stars allotted according to how well you performed in each level from one to three.

Homescapes has other side elements to the game that give it a different perspective as well. For example there are lively and fun characters in the game that you can interact with. You can also befriend a pet cat during your home renovation adventures.

Players can also invite their Facebook friends to play the game and show off how well they have decorated their house and amped up the comfort level of their living in their game. The number of puzzles Homescapes feature are endless and it would take you a significantly long time to complete the entire game – IF you can.

Many players have constantly reported the game being too difficult in some levels and impossible to pass. There are some easy and relaxing levels here and there but most of the puzzles in

Homescapes are exceedingly hard and you might find yourself stuck in a roadblock at various points of time. In fact, it may take you weeks to clear a particularly difficult level. What’s more, the only way to squirm your way out of a blockade is by paying with actual money. There have been numerous complaints by players that although Homescapes is free to download, it’s actually pretty greedy and a pay to play game deep down.

If you’re a fan of match-3 puzzle games, we do recommend trying out Homescapes but do be wary of the in-app purchases that you might have to make.

Homescapes is one of the top apps in the Casual app category, which belongs to Playrix. It's last update was on March 27, 2019 and it has been already downloaded 50,000,000+ times. On the app store it has now 4,424,859 reviews. After you get to Homescapes page on the app store, click install & enjoy it.