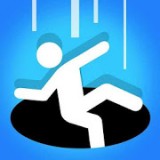 Voodoo brings us yet another addicting game we can waste hours and hours away at playing – Hole.io. This game has a unique concept but a familiar gameplay many other Voodoo games seem to have. The game is free to download and available for both Android users and iOS users.

Hole.io is about black holes and living your life as one. You heard it – you get to be a black hole and control it as you gobble everything and anything in your path. The concept of the game is slightly silly because never in a million years anyone would have thought of a game with the main character as a hole but Hole.io executes the theme pretty well.

The gameplay is straightforward and simple but that doesn’t necessarily mean it’s an easy game to play. Hole.io presents with frustrating challenges and you never really get to reach the end point of the game where you can eat up the entire planet. It is set in a three dimensional metropolitan city and the objective of the game is to slide under practically everything – cars, people, buildings – and gobble them up. The more items you gobble up, the larger the size of the hole will get. In the beginning, you can only gobble up smaller objects but as the size of the black hole increases exponentially, you’ll be able to even eat up entire cities!

In Hole.io, all you need to control your menacing black hole is touching and dragging on the screen of your smartphone. Hole.io features four main gameplay modes but the Classic Mode remains as the hot favorite. In the Classic Mode, players are thrown in the 3D city in an all-out battle royale. Twenty opponents with the same size of black holes begin with you and your mission is to survive and become the largest black hole on the board.

Other modes in the game include the Timer Mode where you’re racing against time, the Solo Run where you can breeze through the city all alone and challenge yourself to become as big as you can without failing, and the Friends Mode where you can immerse in multiplayer battle with your friends.

The local couch multiplayer feature is something we rarely see these days on smartphone apps. This is the kind of multiplayer mode more popular in handheld Nintendo game consoles. In this mode, you can challenge your friends sitting in the same room by connecting your devices via Bluetooth. All you need to access this feature is open the Local Multiplayer menu and create a new room. Then you need to connect with your friends through Bluetooth and make them join the game room. You’re all set and ready to battle out each other in a game of who gets to become the larger black hole.

Hole.io is a free game to download and play but as with many other free apps on the play store, the one constant complain is the huge number of ads in the game. These ads break the tempo of the game and make you eventually want to quit the app. In a way that’s a good thing because with a seriously addictive game as Hole.io, we do need an incentive to close the game. Hole.io does offer some in-app purchases as well that can make the game easier for you but they aren’t necessary to win or survive. 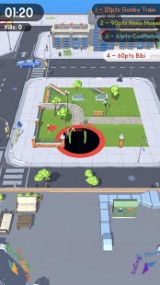 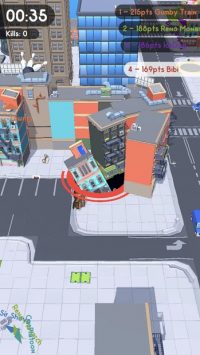 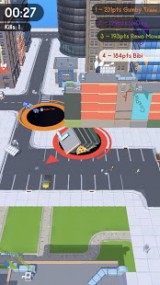 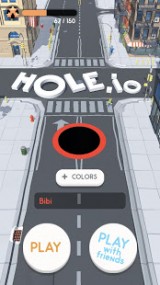