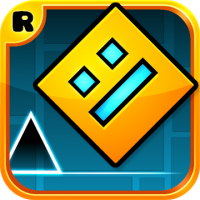 Fast-paced, dramatically musical and incredibly frustrating: Geometry Dash is a game that will either make you jump in excitement or force you to throw your phone to the ground, there’s no in between. As you maneuver a straight faced square through spikes and fires, the soundtrack progressively grows more dramatic and heats up the atmosphere becoming extremely addicting in nature. Geometry Dash has received massive attention by gamers across the world perhaps because of its addictive and frustrating gameplay. You can download Geometry Dash for free from both the Google Play Store and the Apple Store.

If you keep up with the biggest YouTube stars, you might have come across PewDiePie cursing his heart out as he tried to master Geometry Dash. Even an expert gamer like him couldn’t get very far into the game so it’s safe to say that Geometry Dash has the same potential to frustrate you as Angry Birds once did. The objective of the game is to lead a jumping square through a pathway that is laid with obstacles like spikes and fire. When you progress toward the end of a certain level, the square magically transforms into a rocket and the rest of the level has to be cleared through flying the rocket through the obstacles.

Geometry Dash is basically a musical game. Without the music and sound, the heated and thrilling atmosphere simply does not build up. It’s a rhythm-based action game with tons of levels with unique soundtracks and musical tunes. You can also build or create your own levels by using the level editor feature. This is an innovative way to challenge yourself and guide the jumping square through the level you’ve created yourself. You can also track your achievements on the built-in leader board of the game.

There are also elements of customization in Geometry Dash. As you win more and more levels, you can get to unlock new icons and colors to customize your characters.

Geometry Dash also allows players to polish their skills before they step into the main game. The practice mode in the game is where new players can learn the physics of the game before they take on the actual levels.

This app is free to download and play but there are certain in-app purchases you can make to breeze your way along the game. This can sometimes become compulsory because Geometry Dash has its way of testing your patience.

Geometry Dash has a high addiction potential and has a massive audience base (over 100 million downloads on the Google Play Store alone) but it can be equally frustrating. Once you slam into an obstacle, hit a spike or fall into the fire, you’re instantly transported back to the beginning of the game. This is where the game gets annoying because you need to start the game over and over again before you can successfully clear a level. The levels are pretty lengthy as well so clearing them in one go can be a thing of the legends.

New levels are constantly added into the updated versions of the game to keep the player’s interest. Because of some mild violence and a high addiction potential, the game might not be the most appropriate for young children although the official rating of the app is for ages 3 years and up.

Why do we recommend Geometry Dash?

What can be improved in Geometry Dash?