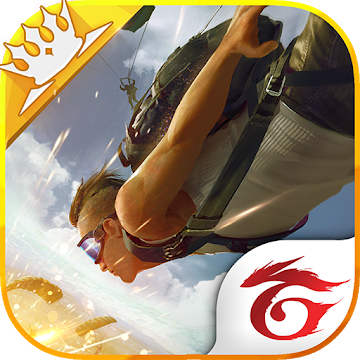 With over a 100 million downloads on the Google Play Store alone, Garena Free Fire easily makes it to one of the best battleground smartphone games to exist. With a gameplay that strikingly resembles GTA5 and the likes, Garena Free Fire comes with the potential to override big titles like PUBG and other FPS games. Garena Free Fire is free to download with additional in-app purchases that you can spend on. It’s available on both Android and iOS devices.

Garena Free Fire is an immaculate show of action with an ultimate survival format. Although the app is categorized as an action game, its main gameplay is centered at shooting and survival. Players in Garena Free Fire are placed in 10-minute games where they have to emerge as the last man standing in order to be victorious. All of the battlefields featured in Free Fire are designed to perfection each with their special landscape perks and complications.

Although Garena Free Fire focuses on shooting, there are other commands that you can operate in the game. Players can drive vehicles just like they can in the GTA game series. They can also hide in trenches and camouflage themselves to become invisible. The end goal, however, is to take down your foes on the battlefield with your weapons and guns. Since Garena Free Fire combines all kinds of action game elements, it is likened to GTA5 in many aspects. What’s different is that Free Fire has a larger play base and you can battle against 49 other players in one battlefield in a matter of 10 minutes. This makes the game much more thrilling and a constant adrenaline-rush roller coaster.

Players begin by choosing their own starting point by landing their parachute on it. There is a designated safe zone where players cannot be harmed or killed. This is where most players start off to gather their supplies before they head out to kill. Controls are fairly simple and ordinary as you would expect from any other shooting game for smartphones. Additional controls include driving vehicles, jumping or hiding in trenches. Ambushing your enemy plays a key role in victory and survival is the ultimate target for every player.

You can also play in teams or squads of four players. Communication within the squad is made possible through the in-game voice chat facility. This is a much better option than simple texting that could distract you from your game. Of course, there is no way for voice chats to be filtered which is one of the reasons the game has an age rating of 16 and up.

Garena Free Fire definitely comes with a lot of potential not only in terms of the gameplay but also in terms of the visuals. The visual presentation and 3D graphics are exquisite. They are smooth, realistic and project you in a real-time atmosphere of the game.

This ultimate survival shooting game has received tons of positive feedback from players and from major game critics. With an easy score of 4.5 stars and up, Free Fire is one of those underrated action games that are definitely worth your time if you’re into this genre. The only few complaints that come from users is the dependence on in-app purchases for powerful weapons and perks as well as a an occasional lag.

Why do we recommend Garena Free Fire?

What can be improved in Garena Free Fire?

Garena Free Fire is one of the top apps in the Action app category, which belongs to GARENA INTERNATIONAL I PRIVATE LIMITED. It's last update was on March 22, 2019 and it has been already downloaded 100,000,000+ times. On the app store it has now 19,981,341 reviews. After you get to Garena Free Fire page on the app store, click install & enjoy it.