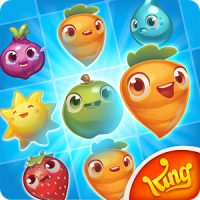 It seems as if the rave of match-3 puzzles will never curb any time soon. With big names in the genre like Bejeweled and Candy Crush, there’s no surprise that this particular puzzle game genre continues to shine. Farm Heroes Saga is another one of King’s creation (the developers of Candy Crush) and as with its other games, successfully makes Farm Heroes Saga both addicting and fun.

The gist of Farm Heroes Saga is familiar: match three vegetables or fruits in a row to blast them and earn points. These food items to blast include strawberries, radishes, turnips, onions, suns, pears amongst many others. The fact that it features vegetables and not candy makes it a healthier option than Candy Crush.

The goal of each level is the same: complete a given task and harvest a certain number of crops within predefined number of moves. Players will earn one to three stars depending upon the amount of points they make and the number of moves they use to complete a level.

While the match-3 game play is classic, the levels do tend to increase in difficulty as the game progresses. In later levels, players are met with crops that need some ‘extra’ harvesting. The frozen crops, for example, can only be thawed when you make a match-3 combination of crops beside it. Similarly, ducklings from their eggs with only hatch in a similar manner and flowers will also bloom only if you make a combination beside it. This can all add a bit of tact and utilizing your moves intelligently instead of mindlessly making match-3 combinations. This sets Farm Heroes Saga at the same level as Candy Crush.

A number of power-ups and freebies are spread in the game and players will get daily bonuses for playing every day. While Farm Heroes Saga sounds more or less exactly like Candy Crush, there are elements of it that slightly set it apart. For example, there is a boss level that you have to play at the end of every realm or world. In this boss level you need to defeat a raccoon that is trying to destroy your crops. The raccoon will be defeated with the same match-3 gameplay; only you need to bring his life health bar to zero to defeat him.

Strangely enough, despite the healthy outlook of the game and the cute graphics the game is rated suitable for children 13 years and up. We’re guessing this might have something to do with the many in-app purchases the game has to offer. While Farm Heroes Saga doesn’t necessarily promote their in-app purchases too much, you might be forced to pay and purchase power-ups to clear an excruciatingly frustrating level.

Why do we recommend Farm Heroes Saga?

What can be improved in Farm Heroes Saga?

Candy Crush fanatics will find Farm Heroes Saga a homely and familiar experience. It follows the same classic match-3 gameplay but incorporates a brand new storyline, healthy crops and boss levels to clear. That, along with the colorful and fun graphics, make Farm Heroes Saga a game to try. 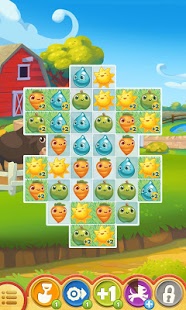 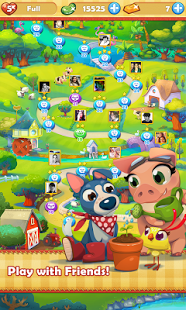 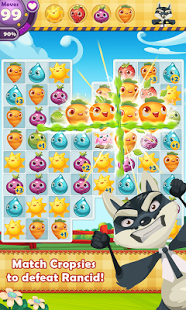 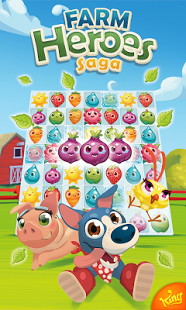 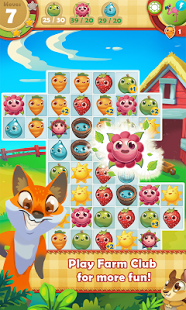 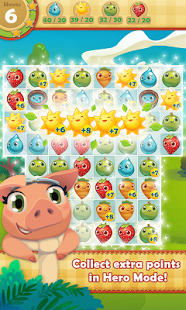