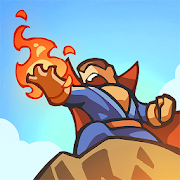 Empire Warriors is a free to download and play strategy game packed with action and combat. If you’re a fan of this genre, we suggest that you give Empire Warriors a shot. It’s an addictive game with well animated graphics and chockfull of content. To get the app on your phone, simply download it from the iTunes app store or the Google Play Store.

Empire Warriors is set in an epic fantasy world where there are characters of all skin and species. You’ll get to meet and control humans, elves, dwarves, orcs and other mythical creatures that are typical in a fantastical world. The world featured in Empire Warriors is also extremely vivid and diverse and there are dozens of places to explore, battles to join and castles to build. At the end of the day your goal is to emerge as the champion of the fame with achievements and skills under your belt. You can do this through collecting tons of weapons, upgrading your characters and unleashing magical elements into the battle field.

The app has a florid of content to offer with around 10 powerful heroes that you can take into battle. Each hero in Empire Warriors has his own unique set of skills and abilities that can prove useful in battle. Empire Warriors is a real-time strategy game and the only way to really excel in it is by proceeding with tact and strategy.

There is also a base building aspect to the game and you can build and control up to 4 castles. These castles have features that you can upgrade and use to your advantage. Each castle also has its own particular features and units. The Barrack Tower is where you’ll find the strong and unbeatable warrior. The Archer Tower is the castle that deals with physical damage. The Golem Tower can throw giant boulders and rocks on to your foes. Finally, the Magic Tower is where the most fantastical things happen – you can summon dragons through it.

There are also up to 5 different strong support power-ups. These power-ups include Armageddon, Blizzard, Blessing of Nature, Guardian of Kingdom, and the Magical Landmine. Again, in order to make the most out of your power-ups, you need to know how and where to use them in the battlefield to your advantage. Even if your troops and power ups are damaging, without strategy you can’t really make it too far into the game.

The list of enemies in Empire Warriors is even more colorful than the heroes. In total there are about 30+ enemies that you can battle out. The entire game is set in a fantasy environment with several different worlds and fantastical areas to explore. You can also take part in some tournaments to better your skills.

Empire Warriors has a pretty smooth gaming format. It’s bold and full with features to the brim. Although the controls are fairly easy to understand, they are hard to master. The non-stop action tactical RTS gameplay of Empire Warriors lets players go into battle with 1 active skill equipped and 3 passive skills. The battles can be pretty challenging but they are still immersive and super addictive.

Although Empire Warriors has a lot of great features, the one thing it really lacks is originality. The game feels like a rip off of other big names like Kingdom Rush. It would have been nice to see some more originality and uniqueness to the game.

Empire Warriors is one of the top apps in the Strategy app category, which belongs to ZITGA PTE. LTD.. It's last update was on March 25, 2019 and it has been already downloaded 1,000,000+ times. On the app store it has now 50,061 reviews. After you get to Empire Warriors page on the app store, click install & enjoy it.