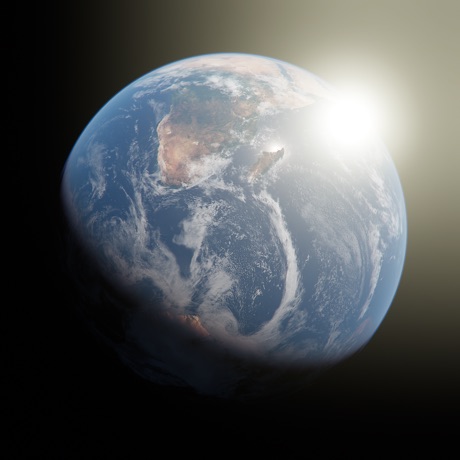 Earth Impact makes use of an advanced computer technology to create a hyper realistic game. Available to purchase from the iTunes Store for 99 cents, Earth Impact is a visually satisfying destructive puzzle game.

This app doesn’t rub off as a game at first look and that’s all thanks to the exemplary graphics it incorporates. All images of the Earth in this app are obtained from actual scientific NASA imagery that recreates the planet as accurately as possible. But the goal of the game isn’t just to study the planet in detail; the goal is to obliterate it. You heard it, Earth Impact is a game with a seriously destructive potential. Although it is categorized as a puzzle game, there’s little brain storming involved in this game. In Earth Impact, players are tasked to shoot asteroids from outer space on the planet Earth to wipe off the human race completely. How you plan your attacks is where the strategic or puzzle part of the game comes to play.

The controls of Earth Impact are pretty rudimentary. All you need to do to fire an asteroid is to locate and aim at the place on the planet where you want to launch your attack. You can swipe the screen to rotate the globe of the Earth and you can even zoom in closer to get a better view of where you want to launch your attack. To release an asteroid, all you need to do is tap once on the touch screen and this will lock in your target on the planet. Then you need to tap again to shoot the asteroid. Double tapping is what launches the attack and results in catastrophic destruction.

Here’s the thing: there’s a limit to the number of asteroids you can use to wipe off the human race from the face of the Earth. You can score higher by creating tremendous amounts of damage before your ammo of the asteroids runs out.

Earth Impact definitely packs a unique punch with its self-destructive theme and amazing visuals but when it comes to challenge, this game can lack. The app features only five challenges without any extra content. The game is pretty short and once all the five challenges are over and done with, only few dedicated players choose to keep the app in their smartphone. This game makes for a fun pass time but only temporarily. Despite this we can’t discredit all of the amazing features that it does have. Since Earth Impact is a paid app there are absolutely no ads in the game. In fact, there aren’t any in-app purchases to give you that extra leverage with real money. This makes Earth Impact a casual game with nothing breaking the tempo of the gameplay and no in-app purchases or special rewards to tempt you into spending real money.

The best part about Earth Impact is the graphics, hands down. Created with hyper realistic computed technology, Earth Impact definitely leaves a great impact on the eyes and perhaps the graphics are the main reason for this app gaining such a high rating on iTunes.

Unfortunately no version for Earth Impact exists for Android and Android users will have to sit this one out.

Why do we recommend Earth Impact?

What can be improved in Earth Impact?