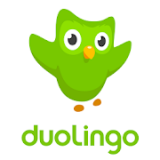 If there was an app that could make your free time productive and entertaining at the same time, it’s Duolingo for sure. The name aptly describes what this app is all about. That’s right – through Duolingo, you can learn new languages and become bi or multi lingual within a matter of days. Rated as Google Play’s Editor Choice app as well as showered with compliments from major media outlets like the Wall Street Journal and the TIME magazine, Duolingo is one stellar app. You can download this app completely for free from the Google Play Store for Android, or the Apple iTunes store for iOS devices.

Duolingo helps you learn new languages and there is several of different language support in the app. The developers also constantly add to the list of languages that their app can teach so you might just find a less common language to learn in there. Currently you can learn Spanish, English, German, Italian, French, Turkish, Dutch, Irish, Portuguese, Danish, Swedish, Polish, Greek, Ukrainian, Esperanto, Hungarian, Hebrew, Norwegian, Welsh, Romanian and Swahili. Romanian and Swahili are two of the latest additions to the app and we expect the developers to add more new languages to learn through Duolingo.

Duolingo makes your time of procrastination both entertaining and productive. You enjoy full learning languages that are schooled to you through a series of exciting games and challenges. Plus, you get to learn new words and languages out of it. Hence, Duolingo is a win-win app with both an educational aspect and entertainment. Plus, the app is pretty addictive as well so you won’t be bored trying to learn your new language from Duolingo

Rated as a family-friendly app, this languages app is definitely a perfect fit for children and adults alike. It’s completely children friendly and can help to teach them new languages or perfect the ones they already know of.

What users of Duolingo love about this app is the fact that it takes on a completely different role when teaching new languages. Instead of the standard lectures that anyone can get tired of, Duolingo makes learning languages a fun and addicting experiences. Throughout the app you can find challenges and games loaded with bite-sized lessons to teach you exactly what you need to know about the language you want to learn.

You can also track your progress in the app and see your achievements in learning the new language. This adds an element of competitiveness that helps you strive and keep on learning the new language. You can also learn more than one language at a time and become truly multilingual. However we wouldn’t recommend that since learning an entire language isn’t as easy as it seems even if it’s done through a colorful and fun app like Duolingo.

Duolingo promises effective and quick results. The app advertises itself as delivering spectacular results in only 34 hours which can equal to one university-level semester. This is pretty great but it might not apply to everyone.

Duolingo is a free to download and use app so you can access most of the features completely for free. However, if you want to learn at a more advanced level, you could invest in the in-app purchases. Contrary to games that are usually non-productive, we’re not against spending some real life cash on an educational app like Duolingo.

The app design of Duolingo is pretty great too. It’s well developed and easy to navigate about. The UI is especially friendly but sometimes there are a few technical and language errors in the app.

Duolingo is one of the top apps in the Education app category, which belongs to Duolingo. It's last update was on April 3, 2019 and it has been already downloaded 100,000,000+ times. On the app store it has now 7,390,941 reviews. After you get to Duolingo page on the app store, click install & enjoy it. 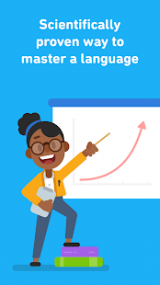 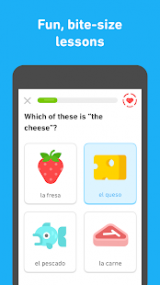 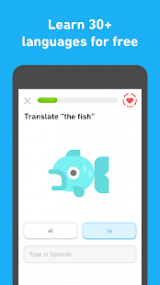 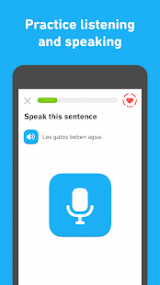