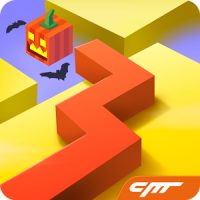 There aren’t many games on the app stores that incorporate a perfect symphony to a complicated obstacle-course gameplay. Dancing Line sets a standard in this type of genre. While it is largely a musical game, the obstacles met in the levels aren’t always a piece of cake.

Developed by the renowned Cheetah Games, Dancing Line comes with a promise of a clean rhythmical gameplay as well as growing difficulty to keep the players hooked on it for days. The objective of every level is simple: Direct a snake-like line through a maze as you tap according to the beat of the music. Fair warning: you’ll need to use headphones for this one to enjoy the full experience of the game.

At first look, the game seems pretty easy. The first level can easily be completed successfully by just about anyone but players soon begin to realize that the blockades begin to increase in amounts as does the beat of the music. Once an obstacle or blockade is hit, players die immediately but they can be revived and begin from where they left if they have enough lives.

Each level has a landscape of its own – usually a magical place with sparkly obstacles that tempt you to crash into them. As you move the line across each landscape, you can collect gems, coins and crowns along the way. The more items you collect, the more bonuses you’ll get at the end of the game and the most mystery prizes you can unlock.

Dancing Line began with only five levels but since its inception, a number of levels have been added to the game and they continue to grow. The levels themselves are all innovative and interesting wanting players to unlock more and more. In fact, there’s one that’s dedicated to Alan Walker’s hit song Faded.

The music in most levels is pretty much the same tune but amped up with more beats and different instruments each time. The original tune begins in piano but in different levels the instrument changes. Take the Beach level for example. In this one, the original tune takes a dance/electronic approach. Every level and its landscape matches perfectly with its music making Dancing Line a splendid musical affair.

There is an obscured storyline to the game as well. By winning each level, you grow closer to saving the realm of the Dancing Line. There are also extraterrestrial characters, gift boxes and bonuses interspersed in the game. Despite the simplistic graphics, the UI design isn’t too easy to navigate at first. There aren’t many instructions or a tutorial and players have to figure their way around the app themselves.

Dancing Line is a great game; one that will be praised for years to come by the musical genre. But the game does fall back heavily on one big point: advertisements. The gigantic amounts of advertisements in the game can be very frustrating. These ads tend to show up right after you finish a level, during a level when you hit an obstacle and in other areas of the game.

The app also constantly shoves free videos to watch at you. In fact, players cannot go back to the main menu after a level has been completed without being advertised about how they will be missing out on freebies if they don’t watch the advertisement video. The game also sometimes crashes or lags when an obstacle has been hit, making you lose your tempo and forcing you to exit.

Why do we recommend Dancing Line?

What can be improved in Dancing Line?

Despite its downsides, Dancing Line is a stellar game in the genre of musical meets obstacle-course. And with the gorgeous graphics and excellent tunes, there’s no excuse of not giving Dancing Line a shot. 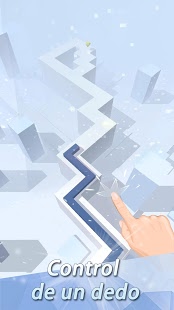 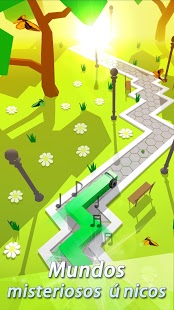 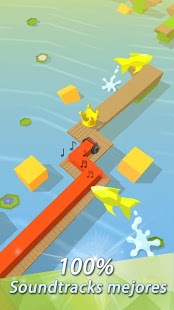