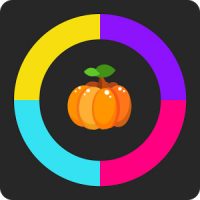 Color Switch is an amped up, justifiably more colorful take on an obstacle-course puzzle game. The game has fared surprisingly well on both the Apple Store and the Google Play Store with over 200 million downloads in total. Although a game for children, Color Switch can be an interesting puzzle game for adults as well.

Developers of the game are continuously improving Color Switch and the latest version has variety of different features to break the gameplay monotony.

The gameplay of Color Switch is unique and something you’ve probably never played before. It’s simple and easy to understand all the same but that doesn’t mean it’s an easy game to play. Although the aim of every level is to match balls with their corresponding colors on a spinning wheel, the focus and pace involved can sometimes raise the difficulty and cause frustration.

Color Switch was created as a fast-paced obstacle-course puzzle game which required focus. Unlike most other games of its type, Color Switch is based more on your speed, timing and attention than it is on luck and mindlessness.

The game features around 6 different modes with over hundreds of levels. One of the newer modes – the Ocean mode – has over 40 new levels and 3 new custom balls. Other modes include the Gravity mode, Rebound mode, Brick mode, Launch mode, Phoenix mode and the Star mode – each with their own tweaks and features.

Each level in each mode is characterized according to its level of difficulty – easy, medium, hard or endless. Players can unlock the more difficult modes as they progress from their way up.

Color switch has an impressive UI design and graphics that are quite appealing to both kids and adults. The music and sound effects of the game are also fairly tolerable and do not grow annoying overtime as with most puzzle games.

There is a degree of customization as well in the game. Players can purchase new and exciting balls with the stars they earn through the levels. This makes the game a lot more fun than using the standard balls that you have since the beginning of the game.

The game also has a dedicated corner for the player’s achievements as well as the leaderboards so that you can keep track of how well you’re doing in the game.

Despite the splash of color and enthusiasm the game hopes to convey, there is a sinister side to it although not outright obvious. Many players suffer from the constant promotion and advertisements in the game. The in-app purchases Color Switch offers are also quite attractive and could coax players into opening their wallets.

These in-app purchases include clearing levels they’re stuck in, getting double the amount of stars than you normally would and to get an ad-free version of the game. This last purchase option makes it obvious that the creators of the game know how frustrating the endless number of in-game ads is to the players.

Most of the poor reviews Color Switch has received on the app stores is because of this sole reason. Not only is the amount of advertisements annoying but the content of the ads might not always be fit for a child playing the game. Parents have complained on numerous occasions that the ads shown in the game contain adult content as well as bad language.

Despite the backlash, there is no doubt that Color Switch is a solid puzzle game when it comes to the actual gameplay. It’s different and that’s what makes it so popular amongst smartphone gamers. It’s also a great way to kill time.

Color Switch is a game to have on your Android or iOS device if you have a passion for addicting puzzle games. It’s a refreshing change from the typical Subway Surfers and Temple Run obstacle-course based gameplay as well as a change from the popular puzzle games like Candy Crush.