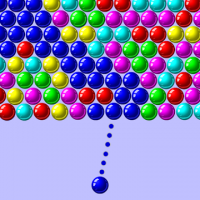 Match-3 games have a certain appeal to them and we’re not completely sure why. These games can quickly become addicting and force you to spend hours on them. Candy Crush, Bejewelled and many others employ the same concept. But Bubble Shooter is where it all began with. Bubble Shooter is one of the most classic match-3 puzzle games to exist. Its simplicity can drive you into addiction and the number of levels and features don’t help either. Bubble Shooter is a highly addictive match-3 game that is available to download for free on the Google Play Store and the Apple iTunes Store.

While it’s true that Bubble Shooter is as classic as match-3 games can get, it’s not like this particular app set the building block for it all. The first bubble shooter game probably appeared in those handheld toy consoles. The game took all types of shapes and forms ever since as PC games and now smartphone application. It’s safe to say that the fire of this bubble shooting concept hasn’t died down and the success of Bubble Shooter on the app stores is proof of just that.

The objective of the game is simple: aim your ball at a matching color and make them blast when you’ve hit a sequence of 3 matching colors. Although Bubble Shooter is categorized as a casual and relaxing game, it can tend to get complex in the later levels when the match-3 sequences require careful and precise aiming.

At the end of each level your score is calculated and you’re allotted stars from 1 to 3 based on how well you did. If you’re fast enough and use a few number of moves to clear a level, you’re automatically awarded with a higher score and a higher star rating. Oftentimes strategy also comes to play when you want to score higher in the minimum amount of moves. That’s when you need to plan out each move you make so that you can top those leader carts.

The levels in Bubble Shooters are divided as missions and they number quite a bit. In fact currently there are over 2000 levels in the game with new ones being added on the daily. Players are also constantly showered with bonuses and daily rewards to keep their addiction hot and fresh. Plus there is more than just one mode in the game. You can either choose to play in Classic Mode and take on level after level or you could opt to play the never ending Arcade mode. Additionally, there’s a Color Blind mode with its own set of unique features.

The graphics of Bubble Shooter are pretty elementary. They don’t pop or make a statement. So if you’re someone who requires a good visual presentation in your games, this one just might not be for you. The simplicity of the graphics keeps with the classic bubble shooting themes. There are a lot of vibrant, multi-colored balls to shoot and blast but that’s pretty much all the art you can get in this app.

The app is easy to navigate and suitable for children. The user interface is friendly and the app design isn’t too hard to move around.

Why do we recommend Bubble Shooter?

What can be improved in Bubble Shooter? 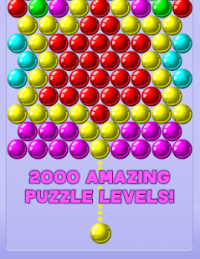 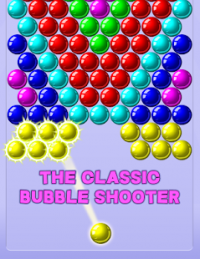 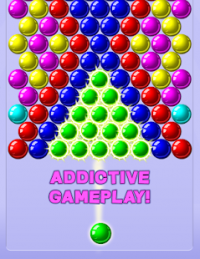