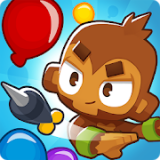 Developer Ninja Kiwi has recently added the latest installation in the famous Bloons franchise. Bloons TD 6 is a tower defense tactical game with an amalgam of features, perhaps a bit too many at the same time. This app has received some pretty awesome reviews from fans of the Bloons franchise, new players and critics. But there are certain areas of concern in the new game particularly the fact that it is isn’t too different or unique than the last game in the series.

Bloons TD 6 follows a tower defense strategy gameplay where players control units of powerful and well-equipped monkeys to defend their towers against menacing balloons. While the storyline sounds simple and straightforward, getting into the game is not so much. For newbies, Bloons TD 6 can be a frantic affair with ambiguous controls and objectives. Fortunately, a helpful and thorough tutorial exists in the game that you can watch any time to get yourself accustomed to the mechanics of Bloons TD 6.

The game initially lets players use a limited number of units or monkeys slash towers that you can use to pop the rising balloons. Later on, new units can be unlocked with better abilities. These include pirate monkeys, monkeys equipped with darts, ninja monkeys, alchemist monkeys, monkeys that spit fire balls and more.

There’s also a decent variety of settings to choose from. At the beginning, players can choose 9 maps but new stages are unlocked as you progress further into the game.

All in all, Bloons TD 6 provides some great variety that keeps the player’s interest. Twenty levels were launched with the initial release of the game on the app stores but this number has gone up with newer updates happening every now and then.

There are also upgrading options in the game. For example, each monkey tower you have has its own upgrade trees. These upgrades can become essential at some point when certain balloon variants can only be taken down by the upgraded monkey tower.

The evil balloons, more aptly named as the Bloons, also come in a colorful variety. Apart from the basic type, there are others like the Fortified Bloon, the Purple Bloon and the relentless B.A.D Bloon etc.

Bloons TD 6 also has more than one gaming mode players can immerse in with their own difficulty levels. These gaming modes include those with Restricted Monkeys, Double Heatlh MOABS and the brutal CHIMPS rule.

Visually, Bloons TD 6 is a pleasing sight for the eyes. With incredible and colorful 3D graphics, Bloons TD 6 definitely trumps the later versions in respect to the graphics. If there’s anything that has received massive improvement from the previous versions of the Bloons franchise in Bloons TD 6, it’s the graphics. The attacks fired are animated and wonderfully illustrated. Even when things get heated in the game, the graphics retain their quality. Plus, monkey units are all animated in a cartoonish manner with upgradable skins to customize them.

One of the biggest perks of Bloons TD 6 is that the game can be played offline as well. There are few strategy games that don’t require an active internet connection but Bloons TD 6 is one of them.

Bloons TD 6 is not a free to play game and requires users to purchase the game on the app store. It also has some additional in-app purchases and players might find themselves spending a lot of their credit card money on the paid features in the game. In short, Bloons TD 6 seeps cash from your pockets pretty frequently without you even noticing it.

Why do we recommend Bloons TD 6?

What can be improved in Bloons TD 6?