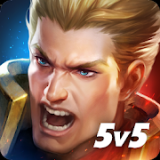 This Editor’s Choice app on the Google Play Store is popular for all the right reasons. Along with providing players a spectacular show of visuals and a smooth action gameplay, what players absolutely adore about Arena of Valor is the massive 5v5 multiplayer online battle arena that it hosts. There are only a handful of games designed in a 5v5 multiplayer online battle arena gameplay so Arena of Valor safely takes the trophy on that part. Unfortunately this game isn’t available worldwide and is only available to play in a select number of countries. This restricts this Tencent Games developed app from becoming a global phenomenon and we do hope the developers release the app for everyone.

Before you download this app, you’ll probably think it’s just another strategy war MMO that adds in elements of fantasy and magic. But Arena of Valor is at a whole different trajectory altogether. It’s far from an MMO or a war-based strategy game; Arena of Valor is a full-on action game with the prime focus being on combat and power. Sure there is always some strategy involved as it is in almost every type of game but don’t be fooled into thinking it’s just another one of those many fantasy war games.

Arena of Valor features an exuberant 5 vs.5 multiplayer online battle arena. Players can traverse this classic arena with three lanes set in exotic sceneries and landscapes of jungles, forests and towers. The landscape is ideal for you to make your move strategically as you take down your opponents in this battle field. The controls are simple to master and understand as well which is a major plus point for Arena of Valor.

There is also a colorful list of heroes to choose from and take in to the battle field. In fact, the app features over 40 different characters that you can unlock, upgrade and take to your battles. These include Tanks, Assassin, Mages, Warriors, Marksmen and much more. The list is endless and enough to keep your interest fresh throughout the course of the game.

The multiplayer online battle arena experience is what truly stands out in Arena of Valor. Players are projected into the game and assigned team members at random through the built-in match-making system of the game. Each match spans over a good 10 minutes so you have a lot of time to plan out your strategies and take down your enemies. The game tells you to draw first blood and destroy the enemy Core which is basically the center of the game.

The game also hosts several modes in the game with new ones constantly added. Players can also directly invite and challenge their friends to battle or take arms against other players from across the world.

Arena of Valor is a fun and engaging action game with a lot to offer. It does have an ad problem though and is restricted in certain countries but overall the game has managed to receive some pretty spectacular feedback and reviews.

Why do we recommend Arena of Valor?

What can be improved in Arena of Valor?

Arena of Valor: 5v5 Arena Game is one of the top apps in the Action app category, which belongs to Tencent Games. It's last update was on January 24, 2019 and it has been already downloaded 10,000,000+ times. On the app store it has now 674,313 reviews. After you get to Arena of Valor: 5v5 Arena Game page on the app store, click install & enjoy it.