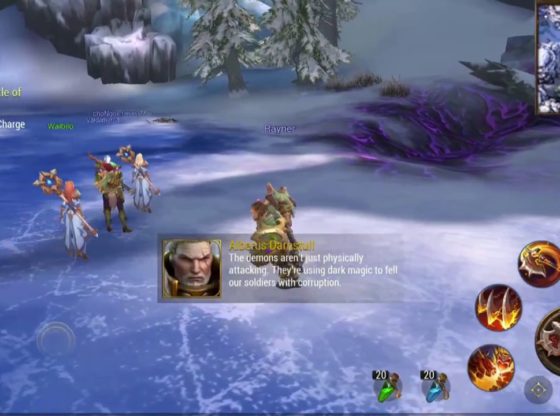 When you are looking for some of the best Android games around, the list of what is and is not hot will often times get very skewed. Everyone has an opinion as to what they feel is the best games out there and as a result, you will get a little confused as to what games you should really make an attempt to play and which ones you should just pass on. The following list is 10 of the best games that you can find for the Android operating system.

There are a lot of positive things that can be said when talking about this game. As a fan of MMORPG games you will find that this is one of the more addictive games around for you to play on a regular basis. There are many things that makes this game stand out from many of the others on the market. One of these is the fact that you can battle as one of three classes. These will be warrior, mystic or Ranger. If you need a game that will give you hours of fun, then this is the one to choose for your Android device.

This is a game that will test your skills like no other game on the market. When you wake up and find out you are locked in a bunker for your own protection and your sister has been locked away as well, you also find out your sister is locked away as well. You will have to race against time and put your skills to the test to save both yourself as well as your sister as well. One thing that will be loved by many players is the fact you can save automatically and will never lose a bit of your progress.

If you are looking to go old school with your gaming, then this title will be the perfect game for you to settle in and play. It is a mash-up of two beloved classics in one game. As a result of this, you will have the chance to play a game that many of us only dreamed about as kids. The game play for this game is simple and straight forward and yet very much addictive for the average player. This is without a doubt a game that you will want to put on your must have list.

The thing that stands out about this game is the fact that it has one of the best premises that a player will see in a lot of the games out there. The basics of the game is that your character works for a secret society and as such travels back in time to change history. This sounds a lot like a good portion of the shows on television today, but the game itself is way better than anything Hollywood could ever dream up. The gameplay will keep you hooked and you will not have a second of being bored while playing this game.

For those that were fans of the first version of this game, the second game in the series delivers as much of a home run as the original. The premise of the game is that you hire and fire team members and mechanics at will and eventually train them to be the best of the best in terms of racing. The graphics may seem a little childish, but eventually you will overlook that and will find yourself addicted to the game and will be unable to set it down after you begin playing. Do you have what it takes to create and manage the best grand prix team?

Fans of 1980’s teen horror movies and those cheesy soundtracks will fall in love with this game for their Android device. It takes the best of these worlds and combines it with characters that the player can really relate to and will want to play as over the course of time. There is plenty of game play for the player to take part in and as a result this will lead to them having hours of fun and even relieving the thrill that they had watching those 80’s cult classics.

One thing that many game players will complain about is the fact that the game never changes and gives them a regular challenge. That is different with this game as it offers monthly updates that keeps the gameplay refreshing and interesting. This is one of the biggest things that will stand out with this game as opposed to many of the others on the market. That along with soundtrack that is one of the best and graphics that you would not expect on a mobile game.

This game lives up to it’s name as this is not a casual running game as the objective is to keep running and making decisions on the fly without a seconds hesitation. Along with running for your life, you also have the use of an ion cannon so there is that at least. All in all, this is a game that will raise your heart rate and will test your nerves to their maximum.

Puzzle games do not come any better than this game as you journey through the eyes of a girl named Pan. The adventure is never ending and you never know what to expect, but you know that the game play will be some of the best around and you will love every second that you are playing.

As you can see there are some really awesome games out there and you need to make sure that you check some of the above titles out to ensure that you are getting some of the hottest and best Android games on the market. All in all, these are the best of the best and will be well worth the time to download and install on your system. You might even find yourself becoming a huge fan of some of these titles.