25 Songs to Listen to While Gaming

Home /25 Songs to Listen to While Gaming 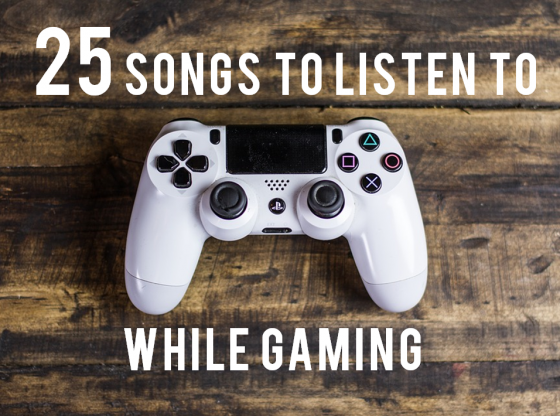 Since the beginning of the 2000’s, the addition of music and soundtracks in video games has become a crucial part in their development, a notion very different from how the acoustic part of video games was considered in the conception of the earliest known video games, which consisted in repetitive and rather simple tunes.

Nowadays, it is a proven fact that the right soundtrack in a video game can exponentially increase the performances of those who play them, and can also take the gaming experience to a whole new level. This happens because music has an immersive effect in people’s subconscious, where they really get into their character’s roles, which automatically activates spurts of adrenaline resulting in quicker reflexes, sharper reasoning, and an overall better performance.

As it is to be expected, for every video game style, there are music genres that fit some more than others. EDM is more compatible with chasing and adventure games, while Metal Rock and Rap are best suited to fighting and combat games, as well as sports games.

Bellow we present you a list of 25 songs of different styles and genres that can definitely pump up your blood and spike your adrenaline production while playing your favorite video games:

This song has a typical EDM rhythm perfect for chasing and platform games.

Chill Electronic tunes will pump your adrenaline with their catchy beats and awesome beat drops.

Fast-paced beats are very welcomed when it comes to adventure games.

There’s nothing quite like listening to a super fast rock tune while playing fighting games and are about to finish your enemy.

Would this be a real list if it didn’t have in it Numb by Linkin Park? For shooting games, this song is a must.

There’s something particular about this song that just makes you want to be in a car race.

Even listening to the song alone makes you feel powerful and invincible.

Imagine yourself playing PES or FIFA while listening to this song. Not even Messi himself would beat you.

These gentlemen had the spectacular idea of mixing the beloved Kill Bill tune with a few chill beats and rap. Genius!

If you’re into racing games, a healthy dose of dubstep is what you need.

Beating the pulp out of your enemies and completing missions at record speed requires an adrenaline rush only Eminem can provide.

This song is ideal for any game you’re struggling with. It will push you to your limits.

This piece has some pretty cool fast paced beats that’ll surely give the adrenaline rush you need in your favorite fighting games.

A song like this could make anyone perform the craziest of stunts.

Listening to Stronger may be just what you need to finally win that Fortnite match you’re so obsessed with.

There’s nothing you can’t improve if you listen to a Kendrick Lamar song while doing it.

This song is ideal for spaceship battles and intergalactic missions.

Anthem is an excellent song to add to your racing games’ playlists.

If you’re looking to achieve great focus and immersion while gaming, few songs can do what Scary Monsters and Nice Sprites does.

The lyrics of this song will give you that extra shot of adrenaline you needed to finally finish that level.

This is definitely a classic for hardcore games when you need to be pumped up 100% of the time.

When you feel like you’re on your last legs, sometimes all you need is a Warrior’s Call to lift your spirits.

As part of the spectacular soundtrack of Interstellar, this song offers the perfect atmosphere for adventure and fantasy games.

Dive into your character’s mind and become the hero you want to be. There’s nothing you can’t accomplish while listening to this track.