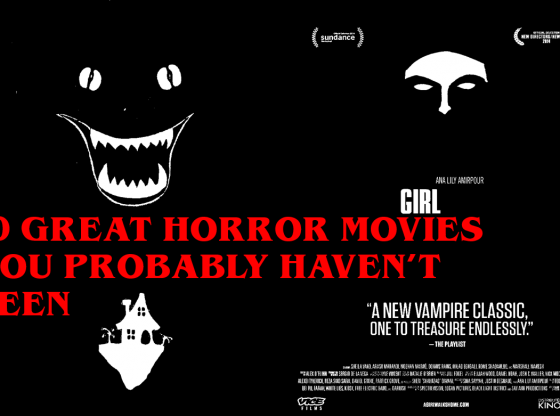 Spooky season is onto us, and aside from playing dress up for Halloween parties, there’s no better way to celebrate the holiday than poring over the most thrilling and horrific flicks ever produced in order to scare the pants out of you. We’ve been graced with several blockbusters and horror hits in recent times, what with last year’s academy award nominee Get Out and this year’s newest terror successes A Quiet Place and Hereditary, it seems the genre has been getting quite a lot of attention as of late, thus delivering high quality flicks that not only fill the quota of scares, but are actually built around a well-thought narrative that might leave you thinking until you finally get the bigger picture. On the other hand, ever since motion pictures were created, the horror genre has prevailed among other sorts of movies mainly for the impact they provide, and the evidence can be seen through Hitchcock’s or Polanski’s masterpieces that still haunt many people’s dreams even after so many years, for classics will never get old, so that means you can’t leave those out.

Now, we’re always looking for the unconventional, and even if popular horror movies are just as good for a Halloween binge watch, there’s some movies that end up pretty much being hidden gems that may not have received the attention they deserved back in its day, but are worth the watch just the same. With that said, we made it to ourselves the task to create a compilation of the best movies you may have not heard or seen yet but should totally watch these following days, including a list of ten flicks we’ve chronologically arranged where we include the best of both new and old underappreciated horror movies, and quick details about each of them, so you can choose for yourself which one makes it into your list. Happy viewing, and let the scares begin!

The 60s were one of the decades where alien paranoia was rampant within any form of fiction, and German director Wolf Rilla certainly hit the nail in crafting one of the most chilling and original stories of the genre back in the day. Set in the British village of Midwich, the story follows the rare occurrence transpired onto the town’s inhabitants where they all fell unconscious for an unknown reason, an after regaining their consciousness, the townsfolk find out all women and girls of childbearing age have become pregnant. What follows afterwards is a series of bizarre incidents done by the children born from the unexpectedly pregnant women, as these strange infants seem to possess powerful telepathic bonds and faculties to make people act against their own will. Terrifying and disturbing, The Village of the damned continues to haunt the audiences just as it did the first time those white-haired children first appeared in the screen.

The crazy plastic surgeon narrative is one nobody seem to get tired of, and its birth is owed to French novelist and screen writer Jean Redon, who along with Georges Franju, managed to create a feature that transcended on the ghastly, where a deeper and penetrating anguish seem to be the vision of the movie. As we’ve said before, the tale follows a brilliant but unhinged doctor on his pursuit to successfully reconstruct the disfigured face of his daughter who was the victim of a reckless car accident which he was responsible for. Along with his right-hand Louise, who was the doctor’s first and only successful face restoration, the distressed father starts the quest to capture women in order to remove the skin from their faces and create a transplant for his daughter. Shot in stark black and white and bereft of sound, this horror movie is considered one of the most elegant and lyrical works ever produced within the genre.

Polanski’s take on a female serial killer was ground-breaking on its own at the time, and additionally, the movie was instantly made a classic within the psychological horror genre for its disturbing visage of a woman’s deteriorating mental state. Repulsion’s narrative centers around a beautiful yet extremely shy woman called Carol, whose intense disgust for men’s desire for her and fear of sex rapidly escalates into a neurotic paranoia, where she isolates herself to the point of hallucinating all kinds of disturbing endeavors that ultimately end up in fatal conclusions for everyone else in the story. Subtly implying sexual abuse was performed in order to trigger Carol’s hysteria, the feature dares the viewer to see beyond its explicit horror so as to uncover the story’s chilling and even more disturbing truth.

A comedy horror that might perhaps be considered too self-indulgent by some and a creative but misguided masterpiece by others, what’s unquestionable about Nobuhiko Obayashi’s work of art is its uniqueness among the art house genre, and how massively influential it became subsequent to its first release. Hausu’s narrative is one big tumultuous clutter that literally came straight out of a child’s imagination, as the director consulted his pre-teen daughter about her ideas of the story regarding seven young girls on a vacation trip to a house belonging to one of the girl’s aunt. What follows later is the misadventures befallen to each of the cabin’s inhabitants, as the house seems to possess some kind of life on its own, and plots against the girls in order to devour them. The movie seems at times frustrating and very much nonsensical, but this is done in such a deliberate and self-aware fashion that it ends up being an enchanting and entertaining story to many.

Named by the Rolling Stone’s magazine as one of the greatest film remakes ever produced, it is sure to say Phillip Kaufman’s film adaptation of the novel The Body Snatchers succeeded in matching and sometimes exceeding in both conception and execution Don Siegel’s cult classic adaptation from 1956. For attempting and faring so well as a movie remake of an already legendary feature, we’ve decided to choose this version instead of its original. Its plot centers on the city of San Francisco, where a pair of health inspectors suddenly discover that an alien infection in the form of pods have descended to earth, and their single purpose is to grow duplicates of people in order to replace them. As expected, the duplicates bear no apparent emotions and are intent on wiping out the entire humanity, which makes it a complete nightmare within what might seemingly be seen as just another science fiction flick.